Tehachapi winds: Blowing through our lives from different directions 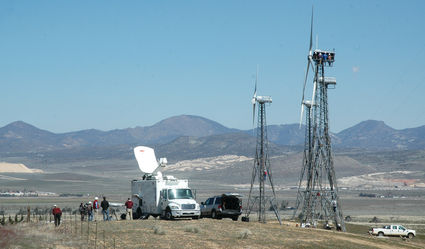 Some of the earliest wind turbines in the Tehachapi area, which began to appear in the 1980s to generate electricity from our abundant winds.

Wind is a fact of life when you live in the Tehachapi Mountains – there's a good reason there are hundreds of millions of dollars worth of wind turbines on local hillsides. Mountain passes tend to channel winds, and three mountain passes – Altamont Pass, Tehachapi Pass and San Gorgonio Pass – were the areas where the wind energy industry was born in California in the 1980s.

While our winds are variable, there are some basic patterns that tend to hold true. Our prevailing wind is from the west/northwest, and that is the direction from which most of our storms and damper, cooler weather comes from – the Pacific Ocean, the largest body of water in the world, is only about 100-miles to the west, after all.

The second-most likely direction of wind is from the east/southeast, which is where the Mojave Desert lies, and winds from that direction tend to be dry. And cause static electricity, and sometimes generally grumpiness among local residents.

Tehachapi has no fishing fleet, of course, but there are many oldtimers who would agree that a dry, relentless east wind is "good for neither man nor beast." The east wind can blow for several days at a time, and people who spend much of their lives outdoors tend not to welcome it. "The damned east wind," my Uncle Hank used to call it, and my adopted grandpa Hooks Anderson used to say, "Aww this east wind – just makes me sick."

As a photographer, I do appreciate the high air quality that sometimes accompanies an east wind – west winds can bring dust, smog and pollutants out of the San Joaquin Valley and up to us, but east winds sometimes leave the air so clear you can make out individual trees on distant mountain tops.

We do infrequently get storms from the east, and these sometimes dump lots of rain or snow on the hills that fringe the east end of the Tehachapi Valley. When we have a strong storm from the east, the air in Tehachapi can be perfumed with the scent of wet creosote bush, even though there aren't any of these hardy desert shrubs in the Tehachapi Valley – but there are millions of them covering thousands of square miles out on the vast Great Basin and Mojave deserts, and the east breeze can bring this pleasant aroma to us.

We sometimes get winds out of the south, but these are uncommon and usually represent an unsettled state, such as in conjunction with a storm, or when the wind is in the process of changing from east to west.

These south winds occasionally follow a period of rain or snow, and then they are what's known as "tree topplers." This stems from the fact that because our dominant winds come from the west and east, those are the directions that trees tend to have most of their anchor roots, to withstand the regular forces that press on them through the years.

When a burst from the south hits, trees tend to be more vulnerable because they simply don't have as many anchor roots in that direction. Tree toppler winds in the past have dropped half a dozen big trees in one night at Philip Marx Central Park, and if the ground is already saturated, can sometimes result in dozens of trees coming down throughout the area.

Wind straight out of the north is basically unheard of in our valleys, because Great Green Wall, as the Sierra Nevada is known, and the northernmost ridges of the Tehachapis simply block wind from that direction.

Oldtimers in our area have observed that three days is usually the maximum period that the wind comes from one direction without stopping or changing, and three days is about the longest that the weather stays fairly constant, so weather patterns in the Tehachapi Mountains seldom get boring and we are known for having variable conditions. A longstanding joke among locals is that, "Tehachapi is the Land of Four Seasons – sometimes all in one day." 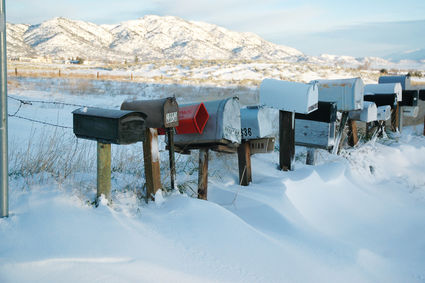 Strong winds from the west drifted snow around these mailboxes on Sage Lane.

In my next column I'll take a month-by-month look, from January through December, at what weather conditions each of our 12 months tends to bring, including the record highs, lows and precipitation figures.