Memories of Rotary Rocket in the air

Chinook helicopter setting ATV down on ramp near XCOR hangar.

Sixteen years ago this month, you may recall seeing a Chinook (CH-47) helicopter at Mojave Airport. That may not sound too unusual to most people, but what was slung under the Chinook was very unusual! The Rotary Rocket Roton ATV (Atmospheric Test Vehicle) was hanging under the U.S. Army helicopter to be flown to its new home at Classic Rotors Museum on Ramona Airport near San Diego.

There were some exciting moments when the Roton started oscillating laterally to the point of discontinuing the test flight. I was at home, working on plans for an upcoming event, listening to the Unicom frequency and heard someone yell, "No, no!" I knew something had occurred and apparently in lowering the Roton back to the ground, the helicopter came down a little too suddenly above the aerial test vehicle and a hole was punctured in the bottom of the Chinook.

My husband Al was flying one of our UH-1H helicopters with a couple of local photographers on board. If everything proceeded as planned, Brian Binnie, original Roton co-pilot, was going to join Al in the Huey for the flight to Ramona. High winds had prevented the project from taking place earlier that week.

The Chinook crew decided that the oscillations of the Roton would make the flight to Ramona impossible and returned it to the airport ramp, next to XCOR Aerospace hangar. Mike Massee was president of the Mojave Transportation Museum and took photos on that day.

Gary Hudson formed the start-up Rotary Rocket Inc. A full-scale test vehicle made three hover flights in 1999, with pilot, Marti Sarigul-Klijn and Brian Binnie as co-pilot, but the company ran out of funds and closed its doors in early 2001.

The proposed design was to be a single-stage-to-orbit, reusable launch vehicle, merging a helicopter with a rocket. The spinning blades were powered with peroxide tip rockets. The plan was to use the helicopter blades for landing the spacecraft as well, like an auto-rotation maneuver.

The full scale, 63 feet tall ATV was built under contract by Scaled Composites for hover flight tests. The rotor head was salvaged from a crashed Sikorsky S-58 helicopter. The Roton ATV was rolled out of the hangar during a dramatic ceremony on March 1, 1999. It was an event attended by approximately 1,000 people, including officials from NASA, the FAA and investor, Tom Clancey.

Rocket science is not my forte' and I never really understood how it was supposed to work, but I did watch Marti and Brian fly down Runway 30 several times and I do remember holding my breath and praying for them!

Flying the Roton was extremely challenging, to say the least as visibility in the cockpit was so restricted that the pilots nicknamed it the Bat-cave. They couldn't see the ground at all and had to rely on a sonar altimeter to guess where the ground was. The entire Roton wanted to spin due to the torque of the spinning rotor blades, so they had to counteract the yaw thrust in the opposite direction, and at the same time keep it moving down the runway.

First flight was early in the morning on July 28, 1999 with three short hops rising above the runway only eight feet. Second flight on Sept. 16, lasted 2-minutes and 30-seconds reaching an altitude of 20 feet. More powerful rotor tip thrusters had been installed which made the sustained flight possible.

The third and final flight was on October 12 and the ATV reached a speed of 53 miles per hour, at 75 feet above the ground and flew almost halfway down Runway 30. It flew close to one mile, at 4,300 feet.

Safety considerations and funding issues canceled all future test flights, but dreams of space flight from Mojave Airport lived on. 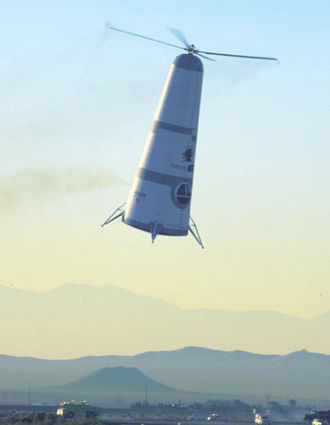 ATV in flight at Mojave Airport in 1999.

Brian Binnie hired on at Scaled Composites and became a Commercial Astronaut flying SpaceShipOne. On December 17, 2003, the 100th anniversary of the Wright brothers' first powered flight, Binnie piloted the first powered test flight of SpaceShipOne, flight 11P, which reached a top speed of Mach 1.2 and a height of 12.9 miles (20.7 km). On October 4, 2004, he piloted SpaceShipOne's second Ansari X Prize flight, flight 17P, winning the X Prize and becoming the 435th person to go into space. His flight, which peaked at 367,442 feet (69.6 miles), set a winged aircraft altitude record, breaking the old record set by the North American X-15 in 1963. It also earned him the second set of Astronaut Wings to be given by the FAA for a flight aboard a privately operated commercial spacecraft. Mike Melvill was the first to receive Astronaut Wings from the FAA.

The Rotary Rocket Roton is now on permanent display in Legacy Park at Mojave Air & Spaceport.

We live in a great place that makes transportation and aviation history everyday!