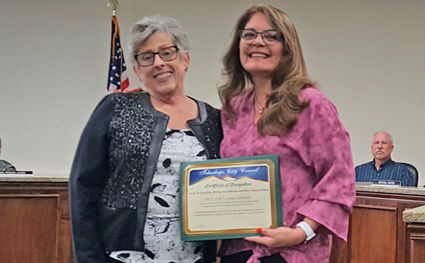 At their May 6 meeting, the Tehachapi City Council presented a Certificate of Appreciation to Mary Lou Corpus-Zamudio for her time as a representative of the City on the Tehachapi Valley Recreation and Park District Board.

"Connection is most important for the community and for the kids," said Corpus-Zamudio of the District's mission.

The Council also voted unanimously for an agreement with Union Pacific for the reconstruction of three railroad crossings – at Green Street, Hayes Street and Dennison Road. The enhanced at-level crossings would make the crossings easier and safer for pedestrians and cyclists. The project would also include security fencing and walkways along the north side of the tracks through downtown with the intent to funnel pedestrians to the new crossing locations.

The project has been in the works since 2016 when an agreement was made for the preliminary engineering and design of the project which accompanied a grant application by the City to the Active Transportation Program. The City was awarded a $2.2 million grant for the project. Now that the long awaited agreements with Union Pacific have been finalized, the next step in the process is to sign the agreements with Union Pacific for the reconstruction of the crossings (one agreement for each crossing) so the work can commence. Also included in the agreements was compensation to Union Pacific for their expenses, insurance and other legal requirements.

Tehachapi City Council meetings are held the first and third Monday of the month at 6 p.m. in the Wells Education Center, 300 S. Robinson St.