Tehachapi Cows at the Beach 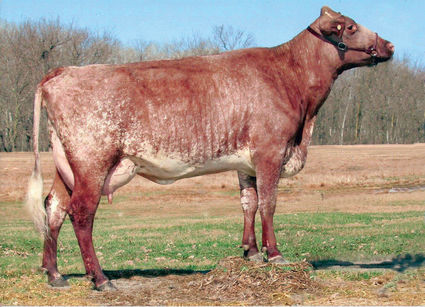 "My parents, Evard and Hazel Dickerson began farming and dairying in Tehachapi in 1911. Their dairy was located below the Tehachapi Pioneer Cemetery in what is now Golden Hills. The place was called Meadow Brook Dairy, and it was right where Meadowbrook Park is today – our dairy was the source of that name. My dad, "Dick" Dickerson, raised registered Milking Shorthorn cattle, so we sold the milk that the cows produced, as well as registered dairy stock. Every summer, Dad used to make arrangements with Southern Pacific Railroad to bring a railroad stockcar into Tehachapi, and he'd load up about six of his best cows, and he'd take them on a circuit of fairs and livestock exhibitions – that was how you got top dollar for your stock, by winning ribbons, and dad did win with his cows. They were just beautiful – he'd put brass weights on the ends of their horns to make sure they were totally symmetrical, and he'd keep them so well-groomed. He'd take everything he needed for him and the cows to be gone for about a month, and he'd usually travel and camp with them in the stock car.

He was down in Southern California, in Santa Monica, and he took them out on the beach and washed them in the ocean. They were so gentle, they'd go wherever he'd lead them. Can you imagine that? Beautiful Tehachapi cows, getting washed in the sea. I think the cows enjoyed their annual summer vacation. It was a lot of work for my Dad, but he enjoyed it too."

Margaret "Peggy" Dickerson Pedigo was a Tehachapi farm girl who grew up helping her father on the Meadow Brook Dairy, working as hard as any boy, and she worked for many years in Tehachapi school cafeterias. She passed away at 91 in 2007.