How farmers opened a Tehachapi bowling alley, bar and restaurant 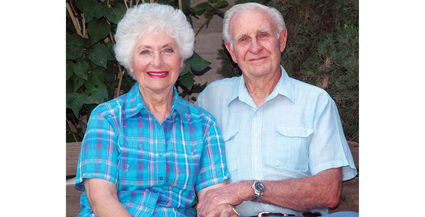 "I (Jim) started school in Tehachapi in 1932 when I was 7 years old. For awhile we lived up in Antelope Canyon at the old lime kiln camp, staying in the main cook shack. I joined the Navy when I was 17, and when I got out, I went to work for my friend Bud Lutge, who owned the Newhall Dairy. In 1953, Bud bought the Antelope Valley Dairy and my wife Teri and I moved to Lancaster, as did Bud and Helen Lutge. I worked at the dairy, and Terri and I also bought 40-acres near 70th St. East and Avenue G and raised alfalfa and 10,000 laying hens."

"In the early 1960s, Jim and I (Teri) and the Lutges decided we wanted to try something besides farming and dairying, so we went in together and built a bowling alley, bar and restaurant on Tehachapi Boulevard. We opened Mountain Lanes on New Year's Eve, 1963 – it was chaotic that night! A lot of Tehachapi residents were enthusiastic but didn't really know much about bowling or how leagues were run, so I helped educate them. Jim went to bartender school to learn that aspect of the business, all four of us – Bud, Helen, Jim and I – were active in running the company.

We started with just a dining counter but expanded to additional booths and eventually a full-fledged restaurant. In 1973 we added a motel – the Best Western, the first chain motel that ever opened in Tehachapi. We had 28 rooms, and the swimming pool was shaped like a bowling pin as a tie-in with the bowling alley. We decorated the rooms with 40 oil paintings by our daughter Sheri, who is a talented artist – all three of our kids are very creative. The last addition was the Mountain Village Liquors convenience store and gas station, which we opened in 1977. We had a great partnership with the Lutges, and we were just farmers wanting to get into another occupation."