Not dead (Just getting reorganized)

The California High-Speed Rail project appeared to be careening toward oblivion when California Governor Gavin Newsom said in his Feb. 12 State of the State address that "Currently, there simply isn't a path to get from Sacramento to San Diego, let alone from San Francisco to LA."

Echoing opponents of the project, Newsom said there had been "too little oversight and not enough transparency."

Rather than abandoning the High-Speed Rail plan, the new governor chose to reduce the monster to smaller bites as funds are available. Some news sources reported the project had been canceled.

"We are moving forward with the plan as conceived," High-Speed Rail Authority spokesperson Micah Flores told Forde Files. "The race to headlines [after the governor's speech] set off a firestorm."

In his address, Newsom focused on the 119-mile section of the 520-mile Phase 1 system (San Francisco to Los Angeles) from Madera to Poplar Ave. in Wasco that is under construction. Under grant requirements, the section must be finished by 2022. The Central Valley segment will help clean the air and provide jobs and economic vitality, he said.

"The governor has called for setting a priority on getting high speed rail operating in the only region in which we have commenced construction – the Central Valley. We are eager to meet this challenge and expand the project's economic impact in the Central Valley," Kelly said.

"Importantly, [Newsom] also reaffirmed our commitment to complete the environmental work statewide, to meet our 'bookend' investments in the Bay Area and Los Angeles and to pursue additional federal and private funding for future project expansion."

The timeline in the May 1 Central Valley and Peninsula Corridors Operations Financial Plan Study (www.hsr.ca.gov/docs/about/legislative_affairs/Central_Valley_and_Peninsula_Corridors_Operations_Financial_Plan_Study.pdf) shows Central Valley "Pre-Operations" extending from 2023 to 2025, the Central Valley "Stand Alone Operations" from 2026 to 2029, and the "Valley to Valley" (San Francisco to Bakersfield) system to be operational by 2030.

Funding is a problem. The California State auditor has found deficiencies in contract management and large cost overruns. The 2008 $9.95 billion bond issue that the voters of California approved was just the kick-off.

"It was never fully funded from the beginning," Flores said.

"This is 10 to 12 different projects with many variables and complexity. The cost estimates changed, so they seemed like an assault to voters."

The Authority could have done a better job of educating the public, he said.

Disturbed by the audit, the Federal Railroad Administration has said it will "de-obligate" $929 million in federal funds for the project.

Some of the ongoing funding comes from California Cap and Trade (carbon mitigation) appropriations, of which the HSR receives 25 percent. In 2017-18, that amounted to $707.7 million. An inconsistent source, the previous year's appropriation was $223 million. So far this year, the payments are $384 million.

Asserting that Newsom can't solve the problems by downscaling, Scrivner said, "It is time to abandon this project once and for all. It has been a mess from the start."

Several supervisors who voted for the resolution initially were supporters of the HSR. Scrivner suggested that the possibility of the construction of the Authority's heavy maintenance facility in Shafter had made the prospect more appealing and "caused folks to temper their disdain for this project from day one." 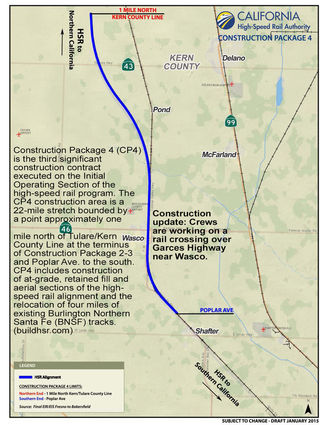 21 miles of the 22-mile CP4 section of high-speed rail construction are in Kern County.

The rail line is designed to sweep through Tehachapi in the 80-mile Bakersfield-to-Palmdale segment, which is the most technically difficult section and likely to be the last part of the HSR to be built. Bakersfield and Palmdale will have stations, but the train won't stop in Tehachapi, at least in the beginning. The line has been designed to accommodate a possible station in the future. The city of Tehachapi has worked with the Authority in planning the alignment, which runs north of the hospital through the Capital Hills property, crossing Hwy 58 and Tehachapi-Willow Springs Road on its way down to Rosamond and Palmdale.

As part of its HSR design process, the Authority paid for the city's Specific Plan for the 1,600-acre Capital Hills undeveloped area north of Tehachapi that City Manager Greg Garrett calls "the last great frontier" in the city. The study cost the Authority $75,000.

Environmental studies continue. The Draft EIR for the Bakersfield-to-Palmdale segment is due in July.