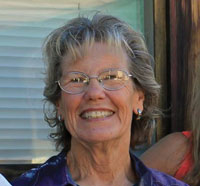 It was a new job at Lockheed that brought Matthew and Cherie Frobish to beautiful Tehachapi from the home they had known for 18 years in the lovely town of San Clemente, Calif.

Matthew was hired this year as an aeronautics machinist/tool control specialist at Lockheed's Palmdale facility. Cherie has worked for Lockheed for eight years as a market planner in the energy efficiency division and she was able to obtain a transfer to their office in Bakersfield. The two coastal dwellers knew they did not want to live in the Antelope Valley and soon discovered that Tehachapi was the "land of four seasons" and about half-way between to the two facilities. Cherie is not due to start her new position until summer, but is able to work from home in the meantime.

Matthew was raised in San Clemente but Cherie calls herself a Virginia hillbilly. She was born in Virginia but her family moved to Covington, La. when she was in elementary school. She met and married a guy from California and moved west in the 1980s. She has a brother who is still in Covington, a brother in Coco, Fla. and a sister in Grosse Pointe, Mich. She has three grown children, a son in Portland, Ore., a son in Dallas and a daughter in Vancouver, Wash. She and Matthew have been married for 18 years.

They both take care of Bear, their rescue Pomeranian who is blind in one eye. Matthew intends to spend his weekends working on landscaping their new home. As a matter of fact, both of them will be working on the yard. Cherie also loves antiques. She said that her mother was an antique dealer so she learned early to appreciate old items. She was reassured after learning that Tehachapi has more than its share of fascinating antique shops for her to explore.

A big Tehachapi welcome to Matthew and Cherie Frobish.

LaQuita Lundquist has been in Tehachapi over a year but admitted that she hadn't had too much time to get to know her new community.

LaQuita was born in Illinois and was 12 years old when her family moved to California. Her father was a Four Square Gospel pastor and was transferred to the Antelope Valley. When she married, she moved to Lake Elizabeth. She has four grown children- two boys and two girls. All of her children live relatively close. As a matter of fact, one son lives next door making it easy for LaQuita to help with the grandchildren. Her other son lives in Pismo Beach and she has a daughter living in Palmdale and one in Phelen.

For years, LaQuita worked as a school bus driver and later transported special needs students. Now retired, she helps her son's family and takes care of her sister Maureen who is disabled. She also volunteers at the pregnancy center every month. Maureen says LaQuita is always the first one up when anyone needs help. LaQuita said that when she has a free moment, she likes to sew and read. Both LaQuita and Maureen take care of their three rescue pups, a Chi-weenie named Buster, a terrier named Kiki and an old black Lab named Romo.

Another big Tehachapi welcome to LaQuita, Maureen and their canine family.