'May the Fourth Be With You' event at the Library

On Saturday, May 4, close to 150 people attended the Tehachapi Library to celebrate "May the Fourth Be With You" with their second annual Star Wars extravaganza event. Members of the famous 501st Legion showed up, including Darth Vader, Boba Fett and an Imperial Pilot. Young Padawans attended Jedi training and obtained a light saber, and then all participants received a Galactic Passport to get stamped as they traveled the galaxy to different planets and stations with fun activities at each. At Endor, they made Ewok puppets and catapults. At Dagobah they made origami Yodas and tested their knowledge. At Hoth they made Stormtrooper snowflakes and snow globes, as well as stuffing people inside a Taun Taun. In the Death Star, they shot Stormtroopers with nerf guns. Goodie bags were given for completion of a Star Wars themed Scavenger Hunt throughout the Library. The event ended with snacks outside in the Cantina, and a costume contest. Many thanks to all of our volunteers and sponsors (True Value, Save Mart, Carlos Donuts and Little Caesars) who made a spectacular event. 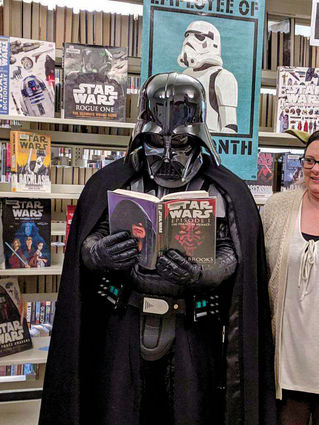 Darth Vader catching up on some reading.