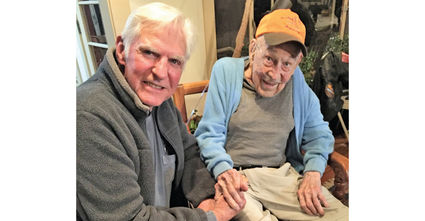 Our nation lost another World War II veteran and member of the "greatest generation," on April 9. Lt. Col. Richard Eugene Cole, USAF (ret.) passed away in Brooke Army Medical Center in San Antonio, Texas at the age of 103.

Cole was born Sept. 7, 1915 in Dayton, Ohio and was captivated by airplanes and the pilots. His boyhood idol was James H. "Jimmy" Doolittle and after two years of college, he was accepted for aviation training before the war. Can you imagine how overwhelmed this 26-year-old must have been to be chosen to fly right seat in a B-25 with Doolittle?

When he retired from the military in 1966, Cole moved to Texas and raised oranges, grapefruit and avocados. No one knew of his wartime accomplishments and he didn't want to be called a hero. He was simply doing his job and serving his country.

Fortunately, his daughter, Cindy Cole Chal, felt fervently that his story should be told. Cole had shunned writers for five decades. Only when Dennis R. Okerstrom approached him with the idea of telling the story, as a way to honor those he served with who didn't come home, did he finally think it would be appropriate. The book, "Dick Cole's War" was published and released on Cole's 100th birthday.

My husband, Al and I were surprised and delighted to receive an email from our friend Dick Rutan at the end of January, stating that he was in Texas with the last living Doolittle Raider. He sent us a photo of himself with Cole.

Rutan told us that Cole was still moving on his own (a bit slower) but sharp as a tack.

Rutan said that Cole was articulate, with a good sense of humor.

There were 80 pilots, navigators, engineers, bombardiers and gunners who took part in the Doolittle Raid on April 18, 1942. Eight were captured by the Japanese who occupied China. One died of starvation in a prison camp and three others were executed.

The following is an excerpt from a letter written by Cole in 1973 about his experience bailing out of the B-25 after the raid: "As we ran out of gasoline we bailed out in order of gunner, bombardier, navigator, co-pilot and pilot. We were flying on instruments at approximately 9,000 feet at night with moderate to heavy rain. Our indicated air speed was approx. 166 mph and so on the indication of fuel warning lights; we bailed out. At that speed there was considerable distance between each crewman. I was fortunate in that I never touched the ground. My parachute drifted over a tall pine tree and caught on top leaving me about 10 feet off the ground. I carried a flashlight, but due to fog and heavy rain; it was practically useless, so I decided to spend the night in the tree rather than look around. I cut the seat away from my parachute and made a hammock out of the canopy and tried to sleep the rest of the night, without much luck."

According to his recollections in the book, Cole remained in India after their rescue and was assigned to Ferrying Command, flying the Hump of the Himalayas for a year in the world's worst weather, with inadequate aircraft, few aids to navigation and inaccurate maps. More than 600 aircraft with their crews were lost during this monumental effort, but Cole survived and rotated home in 1943. He was home just a few months when he was recruited for the First Air Commandos and he returned to India to participate in a covert mission, Project 9, the aerial invasion of Burma.

In 2014, author Okerstrom wrote a detailed accounting of that dangerous mission in a book titled, "Project 9: The Birth of the Air Commandos in World War II." It was during the research for this book that he first met Dick Cole. In a synopsis of this book online, it is stated that Okerstrom's in-depth research shed light on the operations of America's first foray into special military operations, when these heroes led the way for the formation of modern special operations teams such as Delta Force and Seal Team Six. 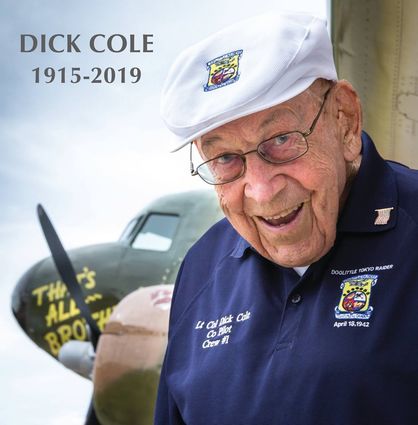 The author learned that Cole's story had never been told because Cole never wanted it told. He felt he was just doing his job and that many others were heroes, not him.