Susan Wiggins to speak at 33rd Annual Prayer Breakfast, May 2 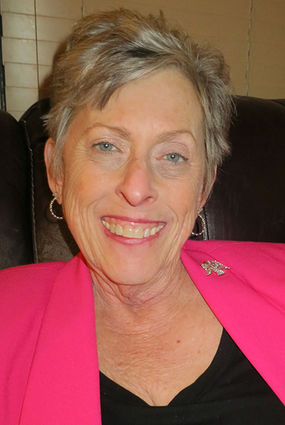 Susan Wiggins, featured speaker at the Thursday, May 2 Kiwanis Prayer Breakfast, is a civic activist whose spiritual convictions help keep the sometimes-bumpy politics in perspective. As mayor of Tehachapi, she is called upon to preside over City Council meetings that welcome public speakers who may be angry and frustrated. She must navigate the simmering tensions among the public and, at times, between members of the Council themselves.

Wiggins recognizes that city councils and other civic agencies are the front line of democracy in action, where citizens can bring their requests and complaints directly, in person, to their elected representatives.

"We encourage them to come to meetings," she said. "We are there to help. If people have problems, we want to hear about it."

The task is humbling. The day after a recent raucous City Council meeting, she appealed to a friend, "What can I do better?"

She followed her friend's advice about fine-tuning her control of the gavel.

"I try to be assertive and not argumentative," she said. "And not provide fuel for the fire."

Even at age 69, one learns and grows.

"God will not give you anything you can't do," she said.

The life verse that guides her in difficult times is Jeremiah 29:11:

"For I know well the plans I have in mind for you, says the Lord, plans for your welfare, not for woe! Plans to give you a future full of hope." [New American Bible].

Wiggins – birth name Deaver -- grew up in Mojave. Her father, Paul, worked for Shell Oil Company and her mother Marion owned a flower shop and covered East Kern as a journalist for four major newspapers. Wiggins took over the journalism jobs from her mother and continues today as a columnist for The Loop newspaper.

She graduated from Mojave High School in 1968 in a class of 60. After a divorce and with a family of three children, she worked at Mojave Unified School District, handling public relations, grant writing and categorical programs.

Wiggins holds a degree in Business Management from the University of Redlands. She studied in a class that met in Lancaster, receiving life credits as a 46-year-old single mother.

"I never got to read a novel for two years unless it was a textbook," she said.

During that time, she made sure to attend all her children's middle school and high school games.

Her son Mike, 50, is vice principal at Standard Middle School in Bakersfield.

Daughter Meg Molloy, 40, is Director of Nursing for Optimal Hospice in Lancaster.

Son Clayton, 36, is a supervising park ranger at Lake Piru.

In 2001, Wiggins married Tehachapi native Ed Wiggins, who had been employed by AT&T and chose to retire in Tehachapi. He died in 2014.

Wiggins has served on the boards of the Mojave Unified School District, the East Kern Airport District and the Tehachapi Valley Recreation and Park District.

"People asked me to run for City Council," she said.

She did run, unseating the late Stan Beckham in 2010. She was re-elected in 2014 and again in 2018, when the first Tehachapi elections were held by district. Only two candidates ran at-large.

"I worked harder in this election because of the districts," she said. "There were new homes, young millennials... I and others went door to door."

Wiggins is no stranger to politics. Her brother, Michael Deaver, was assistant chief of staff for President Ronald Reagan and her older brother Bill, a journalist, is active in Mojave and East Kern civic affairs.

Wiggins attended First Southern Baptist Church in Mojave and since 2002 has been a member of the Summit Foursquare Church, where she teaches Bible study, is on the worship team, sings and is in the women's group.

"We live in strange times," she said. "We constantly have to put our armor on and fight the fight. We can't relax for one minute. Be ready. Be prepared. God will not give you anything you can't do."

The 33rd Annual Kiwanis Prayer Breakfast will be May 2 at McMullan Hall, 407 West E St. (Mill and E streets) at 6:45 a.m. The Men of Faith Quartet will offer contemporary and Southern gospel. Local clergy will participate with prayers. Tickets are $10 each or $70 for a table. The breakfast is the first of three events on that day, which is the National Day of Prayer. The national theme is "Love One Another." The observance offers prayers for the nation's leaders and families.