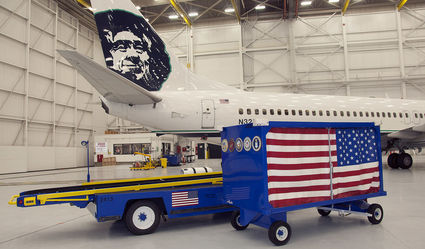 The Alaskan Airlines "Fallen Soldier Cart" will make a brief stop at Love's Travel Stop for fuel around 9:25 a.m. on May 11.

A customized cart created to carry the remains of our Nation's fallen heroes will make a brief stop Sunday, May 11 in Tehachapi.

A procession of motorcycle riders, led by the Patriot Guard Riders, will be escorting an Alaskan Airlines truck with a special cart in tow known as Alaskan Airlines "Fallen Soldier Cart." The escort will make a brief stop at Love's Travel Stop for fuel around 9:25 a.m.

The remains of our nation's fallen service members travel home aboard an aircraft in flag-draped coffins to their final resting place. The Alaskan Airlines Fallen Soldier Program was started by a group of maintenance employees in 2011, who believed that the remains of those who made the ultimate sacrifice deserved special care and attention upon their return to their respective burial sites.

The group volunteered to design and build a cart dedicated solely to transporting fallen soldiers. They also developed protocol for the loading and unloading to ensure our heroes' remains are handled with dignity and honor. The entire flight crew is included in the protocol.

The carts are painted blue, with American flag curtains, and display the military insignias of the Army, Marines, Navy, Air Force and Coast Guard. On the top of the cart is a large emblem that says "Alaska Airlines Honoring the Fallen" along with a star and emblems for the five armed services. The interior has red carpet and the insignias of the Army National Guard and Air Force National Guard.

Once renovation is complete, the carts are donated to airports to be used specifically for off-loading and transporting the remains of our fallen heroes.

The Alaska Airlines volunteers are making sure the fallen continue to be treated with dignity and respect by dedicating a customized patriotic cart to the Phoenix International Airport.

The volunteers and riders will transport the cart on a 1,299-mile journey from Seattle to Ontario, Calif. The group will depart Seattle on May 8 and arrive in Ontario on May 11.

As in years past, this leg of their journey will be sponsored by Tehachapi American Legion Post 221. The Post encourages members of the community to come out with their American flags to show their support and patriotism.

This will be the third time in four years a Fallen Soldier Cart has stopped in Tehachapi. veterans, youth groups and members of the community have come out in large numbers to witness the transfer. The turnout in Tehachapi was reported by one airline employee as the largest he had seen. 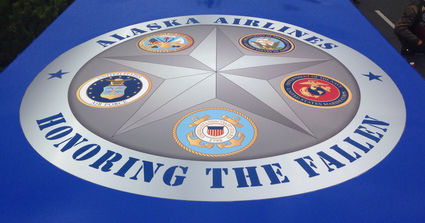 Once in Ontario, the volunteers and riders will join a motorcycle event called "Run for The Wall" (www.rftw.org). The Run is a journey to the Vietnam Memorial in Washington, D.C., calling for an accounting of all Prisoners of War, those Missing in Action (POW/MIA) and to honor those Killed in Action (KIA) from all wars.

During their journey across the U.S., the group will stop in Phoenix, where the cart will be donated to the Phoenix International Airport.

According to information obtained from the Alaska Airlines Fallen Soldier Program website, Phoenix will be the 10th city to receive a Fallen Soldier Cart. They are also in place at Anchorage, Dallas, Honolulu, Los Angeles, Portland, San Diego, San Francisco, Seattle and Washington, D.C. airports.

The cart will remain in the care of Alaska Airlines but will be available for any airline at Phoenix to use.