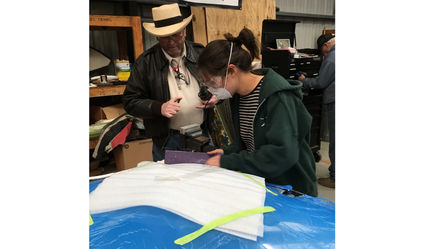 Maia McDaniel and Jay Featherstone riveting a plexiglass window to the door frame.

I was thrilled to hear that we have a young team of future aeronautical engineers building an airplane here at our local airport. It is a lightweight sport aircraft that weighs about 800-pounds empty. This is a special class of airplane created by the Federal Aviation Administration with the intention of providing low cost entry into aviation. Another bonus is that this plane only requires a permit to fly. The 115 horsepower engine was built in Belgium and is totally computerized. The parts for this airplane arrived in one large box and is being put together using 12,000 pop rivets. The aircraft holds two people and cruises at 120 mph.

I do not have to be a pilot or engineer to be excited about this project! It all began in January 2018 and I simply can't wait to see the finished project and watch it take flight. Buzz Wells tells me that he predicts the project will be complete in the summer time, but won't say what year. I got a kick out of that. Buzz was in the Airforce and he is now one of the 12 mentors overseeing the hard work that these students are committing to. He also gave me quite the tour and even let me use the rivet gun! I walked away with my own little pop rivet as a souvenir. 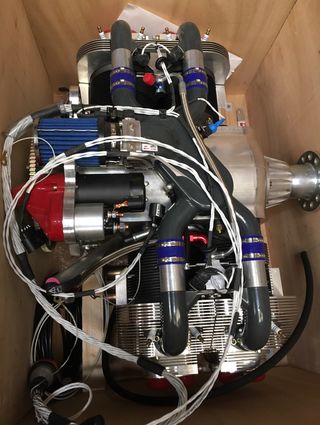 There are students working on this project from different schools and backgrounds. Gabriella Damien, 16, drives out from Lancaster. Her and Maghen Saltzmen, 16, were working on avionics, which was quite impressive. I also met a young woman who is not a student but a 22-year-old private pilot named Maia McDaniel. She used to commute from LA for flight lessons and finally moved here with her parents last summer. Maia has been involved with this project since October and when she isn't building airplanes, you can find her at the Glider Port Raven's Nest, (she says this is the best spot to grab a bite). She plans to study engineering.

I must mention that Valley Oaks Principal Tom Karnes was the first to say "yes" and commit to being the responsible school in order for this project to take place. No school is excluded and all are welcome! I am also very pleased to say that build a plane project was an agenda item at the April 15 City Counsel meeting. The City unanimously voted to rent part of their maintenance hanger for rent of $1! This is beautiful news and I love this town even more because of moments like this. Coming together as a community to support our youth.