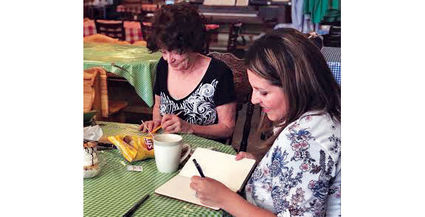 For the last several weeks, local artists Kristina Herrera, Andi Hicks and Carol Casey-Newell have been meeting at the Treasure Trove. Under the tutelage of instructor Judith Campanaro they have been exploring "urban sketching."

You might start seeing the artists around town. The group has decided to meet monthly and share tips and techniques while they sketch local scenes.

According to Wikipedia, "Urban Sketchers (USk) is a global community of artists that practice drawing on location in the cities, towns and villages they live in or travel to. The Urban Sketchers movement was started on Flickr in 2007 by journalist Gabriel Campanario. In 2009 Campanario established Urban Sketchers as a nonprofit organization."

Even though the names are similar, Judith Campanaro is not related to Gabriel Campanario. "Gabi," as he is known in his Seattle community, is from Barcelona. Judith's family is from Calabria. But they do share a common interest, namely sharing life through art.

Campanaro says you don't need to be a "professional artist" to capture what is around you. "Skewed perspective and wonky lines add to the personality of your sketches. But a little instruction doesn't hurt to get you started. That's why I offer urban sketching workshops at the Treasure Trove. But the real experience comes from being in the field," she said.

Anyone wishing to learn more or to join the Tehachapi Urban Sketchers Group can contact Judith at (646) 896-4434. The group meets monthly at different landmarks in the community.