Dive into the work of Alexander McCall Smith 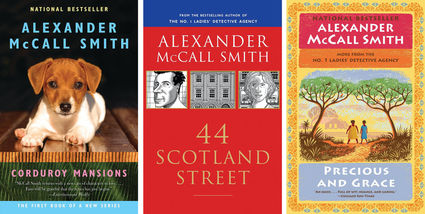 What I like most about Alexander McCall Smith is how comfortable I am with his main characters. It is easy to slip them on like an extra pair of skin and ease into their lives quickly while the settings, a home, a city, a country, grow on you as he describes and experiences them through his lists of characters.

From a cozy home in the "Corduroy Mansions" series, to a complex yet compatible grouping of renters at the "44 Scotland Street" flats, we merge into their stories. Then with the thoroughly delightful Precious Ramotswe, we are invited to share in the creation of her totally new life as she moves herself to Gaborone, Botswana. The landlocked African country gained independence in 1966 and gave rise to hope and growth and prosperity for the average citizen. Precious, one for hoping and thinking positive, ingratiates and inspires as a woman detective in Smith's "No.1 Ladies' Detective Agency" series.

Smith began his life in 1948, born in the British colony of Rhodesia which we now call Zimbabwe. At 17, he studied law at the University of Edinburgh, gaining his PhD. He is now an Emeritus Professor at Edinburgh's School of Law, has worked in human genetics and the bioethics fields, and received an honorary degree of Doctor of Laws. But with all that weight of higher education and experience, it has been his love of writing that captured his true desire and spirit.

He settled in Edinburgh with his wife and two daughters, and has become a most prolific writer. He can turn out 5,000 words a day if at home, 2,000 to 3,000 while traveling. So it isn't surprising that his book titles have exceeded over 50 novels and 40 plus children's books as well. And he is still writing today.

It was his "No.1 Ladies' Detective Agency" series that exploded him into the reading market. But later he took his "44 Scotland Street" series to the newspaper, The Scotsman, and rolled the first of this series out piece by piece, every weekday for six months. Its 100 short chapters became an original, sought after book in print at the end. And then he wrote more.

In addition to the three mentioned series above, there is also "The Sunday Philosophy Club" series, featuring protagonist Isabel Dalhousie. She pugnaciously solves murder mysteries surrounded by a group of friends. In the "Portuguese Irregular Verbs" series, Professor Dr. Moritz-Maria von Igelfeld combats a rival, a librarian and deals with the snobbery of his colleagues, surrounding himself with comedic relief as he tries to win their unrequited respect. In addition to multiple series, Smith has amassed a long list of stand alone novels of varied topics, from human interest, to romance and mystery.

It will take a month of Sundays, Saturdays and all the weekdays, and several months or perhaps a year or so, depending how fast you read, to finish all of Alexander McCall Smith's writings. But don't feel daunted. Just check out the listings and start with one. Dive right in. The reading's fine!