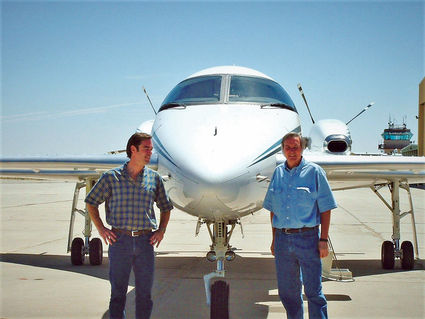 In the early 1980s, Burt Rutan was the world's acknowledged expert in tandem wing, all-composite pusher aircraft. He was approached by Beechcraft to build a 62 percent scale proof-of-concept (POC) prototype aircraft to flight test the configuration, while they began a preliminary design of full-size prototypes. Burt's POC was completed in record time and made its first flight in August 1983.

Although he flew the POC Starship, he never had the opportunity to fly one of the 53 production aircraft manufactured by Beechcraft Raytheon. An unexpected visitor flew into Mojave Airport on Wednesday, July 9, 2003. Rob Scherer, owner/pilot of Serial Number 51 Starship 1 taxied his aircraft to Scaled Composites, shut down the engines, walked around to the front office of Scaled and said, "I understand that Burt Rutan has never had a ride in a production model Starship and if he is interested, I have one sitting out on the ramp."

Not only did Burt fly with Scherer that day, but all the White Knight/Space Ship One pilots went along as well, including: Mike Melvill, Pete Siebold, Brian Bennie and Doug Shane. They were all smiles when they landed. Scherer asked Burt to sign his name to the inside of his aircraft and said, "I'm keeping my Starship, I love it!"

At the time, Raytheon was in the process of destroying their fleet of Starships citing high costs of supporting; creating and locating spare parts and prohibitive liability. Private individuals owned ten Starships and the company was negotiating with them to take a different aircraft in place of the Starship.

I remember the exciting day Wednesday, August 27, 2003, when Scaled Composites pilots first flew the White Knight and SpaceShipOne. After a computer glitch, a second flight and first drop test was successful and beautiful. We were breathless! Nice work Mike. (Holy Moly!)

Handheld radios were everywhere in the small crowd listening to the conversations during the first flight test of the tiny space ship. It was a drop test, the engine was not fired.

A handful of Scaled employees, family and friends were on hand to watch the graceful White Knight lift off of runway 30 with SpaceShipOne in her grasp. Only moments before a beautiful Beechcraft Starship 1, another design by Burt Rutan, the world's first pressurized all-composite business turboprop, took to the skies with owner/pilot Rob Shearer in the left seat.

During the 51st annual EAA Oshkosh Fly-In, Burt was asked about the Starship. "Starship is a phenomenal flying aircraft," said Burt. "I am proud of the way it flies and of the 53 airplanes produced, there has never been an accident, except for a sliding incident on an icy runway in Norway."

"First flights are the most fun," said Burt. "The majority of what you will ever know about that airplane, you learn in the first few minutes. Seeing how an airplane flies that has never flown before is fun." He continued, "I think I feel that more than other designers, because we don't do wind tunnel testing."

Having had the opportunity to fly in Starship, I am delighted that Rob has been insistent about keeping his beautiful Starship. What a dream to fly in and how exciting to have it fly over your head. It is one of the best sounding airplanes in the air – right up there with a P-51. 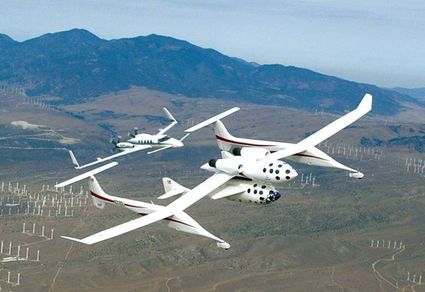 Starship with White Knight One and Space Ship One in 2003.