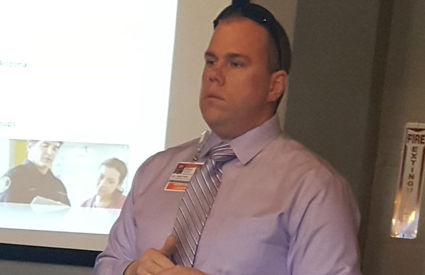 Doug Bennett from Magdalene Hope and Josh Pierce EMS Outreach Coordinator for Dignity Health, teamed up at the March Chamber of Commerce lunch to present a shocking program on the human trafficking problem in our country and particularly in Bakersfield and Kern County. "Human trafficking does exist also in Tehachapi," said Bennett.

Describing the different types of trafficking that goes on in Kern County, Bennett said there are families that are selling their children, grandchildren, nieces and nephews. Some are sold for sex and others for labor. There is also guerrilla- trafficking across the border and romeo-trafficking where a guy will become a boyfriend in order to sell a girlfriend. Many children are now being sent to Mexico.

Bennett also talked about Restoration Ranch whose 13 facilities are available nationwide to help rescue young women 18 years old and over. The closest is located in Ramona in Riverside County. Bennett said that Magdalene Hope tries to use local shelters first. At one time there was a shelter in Stallion Springs that has now been closed and relocated to Bakersfield. He warned parents to be vigilant. Traffickers tend to target foster children or kids who tend to cut class.

Josh Pierce from Dignity talked about signs that could indicate a child is being used in trafficking: being disconnected, shows signs of abuse, is fearful, is with someone appearing to be in control or has a lack of possessions. Pierce added that trafficking laws have been relaxed in Bakersfield and Dignity has been working on staff education to combat the problem.