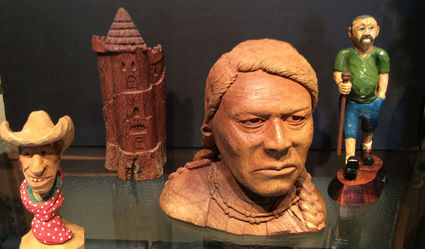 First Friday on April 5 at the Tehachapi Museum will feature the opening of a new exhibit of carved wood objects by the Tehachapi Mountain Carvers club. The club, originally started by 15 people who were involved in woodcarving classes offered through the Parks and Recreation Department in 2001, applied to be a chapter of the California Carvers Guild. TMC was chartered as CCB Chapter 62. In 2010, a new woodcarving class was started at the Tehachapi Senior Citizens Center. An enthusiastic group of carvers developed and the Tehachapi Mountain Carvers club was rebooted in April 2015. Chapter 62 now has 10 active members and fosters a small carving community in Tehachapi.

Wood carving, working wood by means of a cutting tool held in the hands, is one of the oldest art forms. Pre-Historic peoples carved wooden tools and utensils, including handles made for tools made of more durable materials like stone, shells and later on, metals. Wooden articles for artistic and religious purposes were carved by early peoples as well.

The California Carvers Guild recognizes more than 70 categories of woodcarving and pyrography in its competition. Some of the most popular include chip carving, relief carving, carving-in-the-round, whittling and treen (carving small, functional household objects from wood). Closely related is "Love Spoon" carving, which was practiced in Wales, Scandinavia and Eastern Europe in the 1600s or even earlier. Examples of all these types of carving done by local carvers will be in the exhibit. Carvings can be painted, stained, "wood burned" or finished in many other ways.

Join us on April 5 from 5 to 8 p.m. at the Tehachapi Museum for the opening of the exhibit. An exhibit of Pez dispensers from local collector Harold Cox also continues in the Textile Gallery, along with an exhibit celebrating the 50th anniversary of the Tehachapi Community Theatre. Wine, champagne and appetizers will be served. For more information, please call the Museum at (661) 822-8152. The Museum and the Errea House Museum across the street are open Friday, Saturday and Sunday from noon to 4 p.m.

Gallery ‘N’ Gifts located at 100 W. Tehachapi Blvd., will be featuring a new collection “All About Tehachapi.”

(See article on this page).

Tehachapi Treasure Trove is located at 116 E. Tehachapi Blvd., right across the street from the water tower in Railroad Park. First Friday in April will feature Catherine Hammons, glass painter, polymer clay artist and more. Come, greet Catherine, meet our artists and listen to music by Art Larson on clarinet, as well as, the Celtic band “Mayde in Ireland.” Taste a bite of food along with a nip of cider or wine. Enjoy the company of friends. (See article on this page).