Above, the Lunar Gateway, an outpost that will be orbiting the moon in the mid-2020s. Uncrewed demonstration missions in 2024 and 2026 will test descent capability. Human explorations of the moon will be launched from this station by 2028.

The proposed NASA 2020 budget of $21 billion is a ticket to the future.

"We are thrilled with the budget," NASA Administrator Jim Bridenstine, a 43-year-old former Navy pilot, said at a televised press briefing Mar. 11 from the Kennedy Space Center. "It will help us build a sustainable return to the moon."

The budget also paves the way for human ventures to Mars. The NASA timeline aims to put astronauts on the moon by 2028 and on Mars by the 2030s.

He said the budget has bipartisan support from both chambers of Congress, and that it is the first time in more than 10 years that there is money in the budget to fund a return to the moon with human-rated landers.

The mission to space, as stated in the president's Space Policy Directive-1, is visionary in its description of an exploration campaign that will bring NASA together with commercial and international partners to forge the way into space.

"This unified effort will inspire generations and change the course of history as we realize the next great scientific, economic and technical achievements in space," the policy says. (See whitehouse.gov.)

"The Space Policy Directive-1 is to go to the moon, and go fast," Bridenstine said. "We want competition, which cuts cost and creates innovation. It is going to be fast. There will be a human presence on and around the moon."

The budget request fully funds the Gateway command and service module that will be orbiting the moon to serve as a base for sustained exploration.

Between 1969 and 1972, he said, 12 astronauts explored the equatorial regions of the moon.

"They never went to the poles," he said. "The poles are water ice. Gateway will provide the sustainable architecture for a way to learn all about the entire moon. We don't want to miss anything. We have a lot to learn."

The explorers will use resources that are available on the moon. Water ice, he said, can provide air to breathe and water to drink.

The mission requires re-useability in the launch vehicles, tugs, command and service modules, robots and landers. "It's all about a sustainable return to the moon," he said.

The effort will require massive payloads and huge rockets – "A bigger rocket than any ever built, taller than the Statue of Liberty."

The United States will be working with space agencies around the world to accomplish the explorations.

The technology developed on the moon will be utilized to survive on Mars. "The moon is the proving ground," he said. "Mars is the horizon goal." 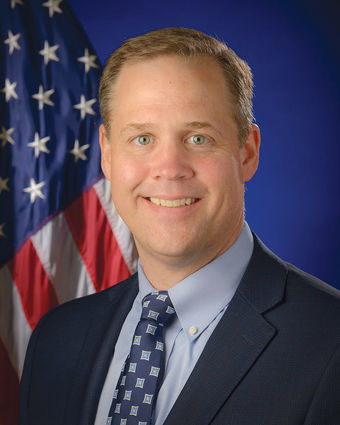 Mars was once covered with water, he said. "It once was habitable. There are complex organic compounds on the surface of Mars. Organic compounds are the building blocks of life.... We're not talking about bunny rabbits, but we'll find potentially life on another world."

Bridenstine indicated that NASA is not abandoning earthly studies. "CO2 is a greenhouse gas. We are seeing higher levels. We need to reduce climate uncertainty."

Many employees of the NASA Armstrong Flight Research Center at Edwards AFB, which is engaged in programs in support of the moon/Mars missions, are residents of Tehachapi.