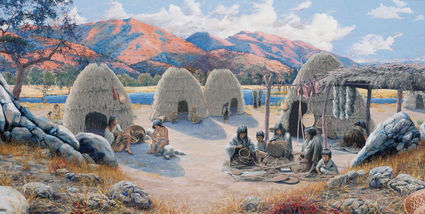 A Nuwä (Kawaiisu or Paiute) village scene as depicted by the mural completed by Colleen Mitchell on the outside of the Hitching Post Theaters on F St. in Tehachapi.

Prior to the arrival of Europeans to North America around the year 1500, California was home to an estimated 300,000 Native people who spoke 300 dialects of about 100 distinct languages. It was one of the most culturally diverse places the world has ever known. Native Californians survived and thrived while adapting to the state's wildly different landscapes.

From fog shrouded coasts to dry inland valleys, from vast deserts to towering mountains, the various grasslands, savannahs, chaparral, woodlands and forests of California offered a variety of food sources and living conditions.

In response, Native Californians developed many different ways of life: with houses, food gathering practices, crafts, tools and traditions that were best suited to whichever particular part of California they called home.

The Tehachapi Mountains occur at a unique confluence of four of California's largest and most important geographical regions: the Sierra Nevada, the Central Valley, the Mojave Desert and the Great Basin. Each of these sprawling ecosystems has contributed to the diversity of plant and animal life found in the Tehachapis. Each of these bioregions also influenced the Native Californians who have lived here for thousands of years.

The First Nations people of the Tehachapi Mountains have long been known to themselves as Nuwä. This word, like many tribal identity terms, means "The People." They are part of the widespread and successful Paiute family of associated tribes. These Paiute relatives include the Chemehuevi, North Fork Mono, Owens Valley Paiute and other tribes. This extended family is comprised of many bands of hardy, adaptable people who lived in a huge area that includes parts of California, Nevada, Arizona and Utah. They are often placed into Northern and Southern Paiute groupings, with the Nuwä considered a Southern Paiute tribe.

Okay, so how do you say the word "Nuwä?" Simple: just say "New-uh," with slightly more accent on the first syllable. That's it. It is sometimes mispronounced like "New-WAH" or "Nuh-waa" but all you need to do is say the word "new" with a little "uh" at the end.

You may be wondering what's up with "ä" -- that funny "a" with the two little dots over it. Those dots are a type of diacritical mark, which are used to affect the way a letter or word is pronounced. The two dots are known as an umlaut, and in the case of the word Nuwä, we use them to indicate that the "a" is pronounced with a soft "uh" sound, not like "ah."

You can encounter the word Nuwä spelled in different ways, including by me in earlier writings, as those of us involved in Nuwä language preservation have gradually evolved a writing and grammar system that accurately reflects this previously unwritten language. Theodore McCown, an anthropologist who worked with Native people in this area about 1902, used the spelling Nuooah, to describe their name for themselves. This may have been an archaic pronunciation, we're not certain, but in any case, say "New-uh" and you'll be saying it the way Native people do.

Anthropologists and archeologists typically use the word Kawaiisu to refer to the local tribe. This is a word of uncertain origin, it has been suggested that it meant "dried meat eaters" in another Indian language, because Nuwä people made venison jerky and potentially used it as a trade item.

Whatever the source, the term Kawaiisu was totally unrecognized by tribal members themselves. "Hin shi'id Kawaiisu?" some of the baffled oldtimers would say, Harold Williams told me, which means "What's this Kawaiisu?" They would also add "Tama Paiute" ("We're Paiute"). Incidentally, the word Kawaiisu, culturally inaccurate though it may be, is typically pronounced "kah-WHY-i-soo" and not "kah-WASS-oo" or "kah-wah-iss-oo" or some of the other interesting attempts I've heard. The way I remember how to spell it is think Hawaii, change the H to a K, add "su" on the end, and you've got Kawaiisu.

So the Nuwä (Kawaiisu or Paiute) are the people most associated with the Tehachapi Mountains. Their territory ranged from the Tehachapis north to the Twin Oaks area, and on Piute Mountain and into the Southern Sierra Nevada. Some Nuwä people, referred to by area archeologists as Desert Kawaiisu, lived out on the Mojave Desert floor, at places like Red Rock Canyon, Jawbone Canyon and Kelso Valley. Desert Kawaiisu had village sites as far away as Coso Hot Springs and Furnace Creek in Inyo County, and Victorville to the southeast in San Bernardino County.

The Nuwä, like most Native Californians, did not practice much agriculture, but obtained food, fiber and medicine from the many plant resources growing wild in the Kawaiisu homeland. They also hunted deer, rabbits, quail, elk, antelope, waterfowl, etc.

Living as they did at the convergence of major geographical regions, the Nuwä embraced elements of two major traditions and lifeways: California Culture and Great Basin Culture. Tribes that practiced California Culture tended to live in rounded willow-frame houses that looked like big upside-down baskets, thatched with tules, and they gathered and processed acorns as their staple food. The Nuwä did these things.

Dr. Henry DeGroot, an author and cartographer in the West in the 1860s, described the Great Basin as "a land of contrasts, extremes and apparent contradictions, of mingled barrenness and fertility, beauty and desolation, aridity and storm." Survival in this environment required Native Californians to be tough and resourceful, and the Nuwä combined their tradition of Great Basin Culture with their knowledge of California Culture lifeways. 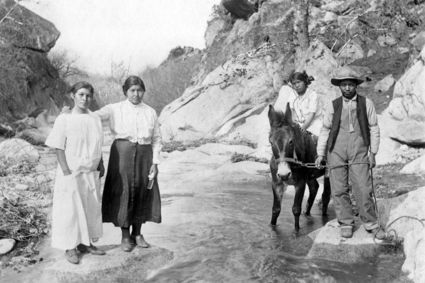 Four young Nuwä people in the Tehachapi Mountains of Eastern Kern County in the 1920s alongside a creek.

Both of these heritages proved useful to the Nuwä, century after century, for more than 3,500 years as they have navigated their varied homeland. This place of oak-covered valleys, shaded canyons, seasonal creeks, hillsides and mountains dotted with Blue Oaks and Gray Pines, or pinyon and juniper, open grassland, Jeffrey Pine/White Fir forests, creosote bush flats and more.

With an interesting, resilient culture that produced wonderful basketry of rare quality and workmanship, the Nuwä contributed to the rich tapestry of Native California life in earlier times, and tribal members continue to make contributions to California life to this day.