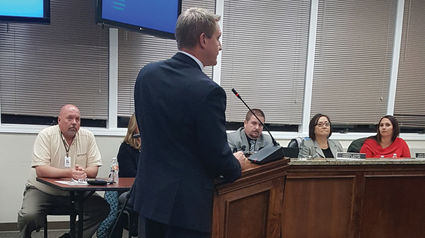 On March 4, the Tehachapi City Council heard attorney Jesse Maddox of the firm Liebert Cassidy Whitmore report on their findings following an investigation of seven different complaints from a number of current and former city employees against Councilman Kenneth Hetge. The complaints listed were retaliation, intimidation, unprofessionalism, undermining the police chief and both gender and ethnicity harassment. The earliest complaint was dated April 2018.

The City of Tehachapi belongs to a liability pool called ERMA (Employment Risk Management Authority) of which Liebert Cassidy Whitmore is one of their representatives. Because of the nature of the complaints, the City was obligated to investigate them. Investigator Michael Hines of MMJ Solutions conducted the investigation and interviewed 15 witnesses. Council members Hetge and Wahlstrom refused to be interviewed, although Councilman Hetge told investigators he wanted to wait until after the election to be interviewed.

The investigation confirmed the complaints of retaliation, intimidation, unprofessionalism and undermining the Chief of Police; but they were unable to confirm the charges of either gender or ethnicity harassment. During the course of interviews, the investigator found 11 cases of interference and intimidation. In one case, Hetge was found to have intimidated an airport employee in such a way as to make the employee fear for his job. He was also found to have posted defamatory messages on Facebook. On another occasion, Hetge contacted the Kern County Sheriff to assist with traffic enforcement at schools saying that the Tehachapi Police Department lacked training.

Several community members appeared in support of Councilman Hetge with a number supporting the City as well.

As a result of the investigation, the report posed three possible avenues of correction: public censure, Quo Warranto (ask the attorney general to remove the councilman) which was not recommended, anti-bullying training as in AB1661 or do nothing. City Attorney Tom Schroeter recommended that the Council take no action at this time.

Tehachapi City Council meetings are held the first and third Monday of the month at 6 p.m. in the Wells Education Center, 300 S. Robinson St.