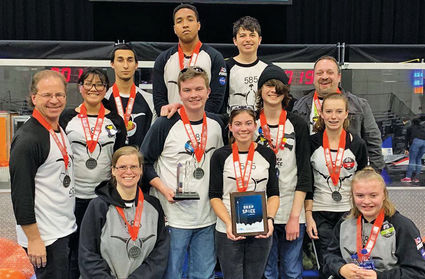 FIRST Team 585 had an outstanding time at the Central Valley Regional Competition last weekend in Fresno. They won the Engineering Inspiration Award for their efforts in promoting engineering throughout the community. This award qualifies the team to compete at the FIRST Championships in Houston. Also, the robot placed 26th out of 49 teams after the students worked through some field communications issues and a faulty controller. They are looking forward to a couple weeks of normalcy before taking "Arp 142" to the Las Vegas Regional Competition, March 27-30. The name Arp 142 refers to a pair of galaxies known as the penguin and the egg. The logo for Team 585 is a rather egg-shaped penguin.