Memories of 'Air Wolf' at Mojave 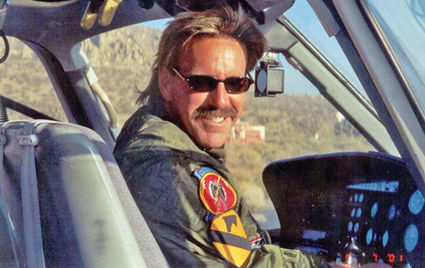 I recently saw in the news that the good-looking star of the TV show "Air Wolf," Jan Michael Vincent sadly passed away. Memories of how many of the scenes for that show in the 1980s were filmed at Mojave Airport and how one of our favorite pilots in the film industry flew one of the helicopters in the second and third season came to mind.

Vincent's character in the series was the Vietnam veteran and loner, called, Stringfellow Hawke. He was a helicopter pilot who was orphaned at 12 years old. He lived with his dog in the wilderness, liked to fish and played a cello. The rest of the time he was a secret agent for the CIA.

He was one of the highest paid TV stars at the time.

A twin-engine, Bell 222B helicopter was modified for the TV series, painted black and was the "Air Wolf" helicopter.

The concept behind the gunship was a super-fast and heavily armed helicopter that could "blend in" by appearing to be civilian and non-military in origin, a "wolf in sheep's clothing" if you will. Air Wolf's insignia patch as worn by the flight-crew reflected this and featured a snarling wolf's head with gossamer wings that appears to be wearing a sheepskin complete with the head of lamb over the wolf's forehead.

In the TV series "Air Wolf," this helicopter performed feats that were mind-boggling, not to mention absolutely impossible, but with the magic of Hollywood, anything is possible! It attained supersonic speeds, delivered countless varieties of ordnance, and always helped to save the day.

The Aerial Coordinator and pilots have been friends of ours for some years. The late J. David Jones, aerial coordinator for "Air Wolf," also worked on many successful feature length films, such as "Apocalypse Now" and "Courage Under Fire." We had two H-model Huey's working on "Courage Under Fire" in Del Rio, Texas.

Our good friends, Rick Shuster and Dirk Vahle were aerial coordinators and pilots. They got their start flying for the entertainment industry on the television series, "Air Wolf" in 1985. They subsequently coordinated for "J.A.G" and "Tour of Duty." 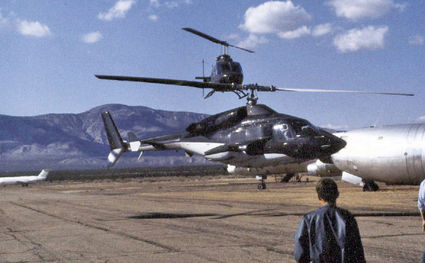 Rick flew the red, white and blue helicopter with Santini Air on the side. All movie pilots know where Mojave Airport is and have been coming here for many decades.

Ernest Borgnine was a WWII Navy Veteran and served from 1935 to 1945. He served on Destroyers and was a "Tin Can Sailor." One of the first movies he starred in was "From Here to Eternity" with Frank Sinatra. He received an Oscar for his role in "Marty" and also starred in "The Dirty Dozen" with Lee Marvin and in the "Poseidon Adventure." He was a familiar face on McHale's Navy, another popular TV show. He even did voices for cartoon shows, like "Spongebob Squarepants."

Borgnine passed away in 2012 and stunt pilot Shuster said, "When I get asked who I enjoyed working with and who is the nicest actor, Ernest Borgnine is at the top of my list. He was one class act."