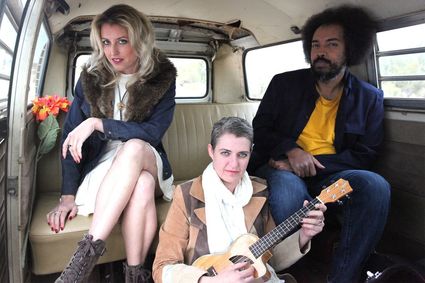 This show has been rescheduled from March 8 to the 16th due to weather.

Whitherward: a 13th-century word meaning, "toward what or which place." It's also a 21st-century acoustic band. In 2014, Edward Williams and Ashley Norton formed Whitherward and set a goal to leave Nashville "to play music we love for people that love music." The travelling duo, with the addition of Stephanie Groot on fiddle, mandolin and ukulele, will bring their brand of Americana/Indie-Folk to Fiddlers Crossing on Friday, March 8.

Both Norton and Williams sing and play guitar. While Norton's parents weren't musicians, she has music in her DNA. Her grandmother was a professional opera singer and her Aunt Millie, who lived on the other side of the country, was a folk singer/guitarist. As a young girl, Norton would receive her aunt's demo tapes in the mail and then sit in the front yard of her Massachusetts home, listening to the songs over and over and thinking, "I'm gonna do this someday."

When her oldest sister got involved in musical theater, Norton would sit next to her on piano and correct her pitch. She began listening to all the Broadway cast albums and eventually took part in school and community theater.

At age 14, after moving to Arizona, Aunt Millie took her to buy her first guitar. She began to learn songs by some of her favorite performers, including Sarah McLachlan, Jewel and The Cranberries. Soon, she was crafting her own songs, taking voice lessons and studying opera, musical theater and classical music.

After getting a degree in English literature, Norton launched her career as front-woman of the popular local folk-rock band, Delcoa. In 2010, she moved to Nashville to pursue a solo career in Country music. She spent four years there, collaborating with other songwriters, producing an album and receiving multiple awards. There was just one problem; her heart wasn't in it. "Nobody was going to work as hard on my career as I was," she said. It was at this point that she teamed up with her friend Edward Williams and dove into the world of Indie Folk and Americana music.

Edward Williams hails from St. Louis, Miss. He began playing piano at 7 years old. In high school, he picked up bass and guitar. For many years, he played with a successful local 15-piece Funk band named "Hazard to Your Body." Williams moved to Nashville in 2006 where he studied audio production. He uses those skills today as chief recording engineer for Whitherward's CDs.

In Nashville, Williams also co-founded the folk-rock band, Elvie and became involved with the Nashville Jazz Workshop, recording and doing live sound for many of their performances. Williams honed his Jazz bass skills by performing with some of the bands. His influences include Fleet Foxes, The Beatles, Sly and The Family Stone and Horace Silver.

Williams and Norton met when he was doing sound for her popular Nashville songwriter nights. After discovering that they lived only a block away from each other, they began writing songs together. Whitherward was born when Williams suggested they form their own acoustic duo.

On this tour, the duo is actually a trio, adding fiddler Stephanie Groot to their lineup. Stephanie began playing the violin at an early age in school because, as she says, "I couldn't play the flute for another year and violin was listed first on the stringed instrument list. Had they been in alphabetical order I would be a bass player." She eventually added mandolin and ukulele to her instrumental list. Groot has played classical, jazz, R&B, blues rock, bluegrass and, now, Indie Folk and Americana.

Whitherward hit a milestone in 2018 when they received a sponsorship from Subaru Europe. They traveled throughout the UK, Germany and The Netherlands for two months, performing in over 20 cities. In each city, they would record a video episode of "Songs from a Subaru."

Whitherward has been called "a modern-day Simon and Garfunkel," with influences including rock, jazz, classical and, of course, Indie Folk. Their performances are full of comedy, intricate musical arrangements, unique solos and thunderous harmonies. They share the stories behind the songs and experiences of life on the road...but "knowest thou whitherward?"

For a special evening, come hither to Fiddlers Crossing on Friday, March 8.

Fiddlers Crossing is at 206 East F Street at Robinson Street, in Downtown Tehachapi. Tickets may be purchased at Mountain Music, Tehachapi Treasure Trove, Tehachapi Furniture in Old Town, Lucky's Barbershop, or online at http://www.fiddlerscrossing.com. They may be reserved by calling (661) 823-9994. Tickets to the concert are $20, and as always, coffee and goodies are included. The concert begins at 7 p.m. Doors open at 6:30 p.m.