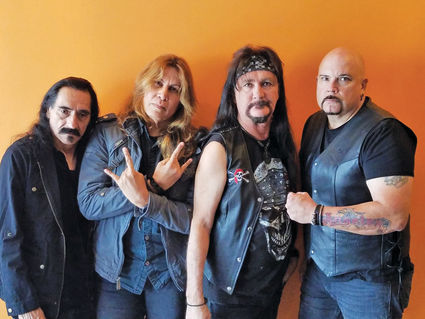 One of Tehachapi's own just became a member of American rock band, Angeles.

"I am really excited about everything to come," Rob Saranpa said.

I love hearing stories of people working toward a dream and the beautiful moment when it becomes a reality. Rob met Dale Lytle, Angeles lead guitarist and the only remaining original band member, in the early '90s when Rob was working as a bouncer at a bar in Northridge. Four years ago, he found Lytle again on Facebook and became his online friend. One Sunday night, after reading about difficulties the band was having finding a bass guitarist (and a little bit of wine to give him some courage), Rob wrote Lytle a message offering his musical talents. It took a couple days, but then the words, "we need to talk ASAP," appeared in his Messenger inbox.

"The message came in like 48 hours later, so I didn't think he even got it. When it came in I gulped, showed my girlfriend then got really happy and giddy, just like a little kid," Rob said.

Soon after, Rob spoke with the band's manager and agreed to practice seven Angeles songs then come in for an audition. Lytle told him later that he went into the audition knowing they weren't going to hire him, just possibly use him for some overseas gigs. That changed after hearing Rob play just three songs.

"They said right then and there that they wanted me to join the band," Rob said.

When asked what genre he would classify himself as, Rob said, "I'm a chameleon."

"I think I have played every genre you can think of. You have to be versatile," he said.

Besides the obvious excitement of joining an established, platinum recording band, one of the things Rob is most excited about is the new album Angeles is starting to produce.

"I'm going to get playing and writing credit on this album," Rob said. "I sent the band a song I wrote in the '80s. They liked it and want to use it on the album."

Rob began playing bass guitar and writing music about 36 years ago. He's been a member of several bands, traveled and performed in 17 countries, regularly plays bass guitar for his church here in Tehachapi and has even written his own self-published children's book called, "The Night Jesus Met Santa Claus."

This is quite the impressive resume, especially when you learn Rob doesn't read music. He's one of those lucky individuals who can hear a song once and know exactly how to play it.

"I play by ear and by patterns, and that has taken me all around the world," he said.

Rob and his new band mates are rehearsing every weekend and just finished a gig at the famous Whiskey a Go Go in Hollywood.