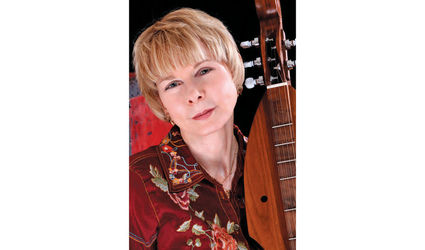 One critic said Americana singer-songwriter Dulcie Taylor is, "a major talent who's been hiding from the rest of us for too long." Bringing "hidden talents" to Tehachapi is one of the goals of Fiddlers Crossing. Taylor will be returning to the downtown music venue on Saturday, Feb. 23 at 7 p.m. Her first appearance at Fiddlers Crossing was back in 2014. She will be joined by guitarist George Nauful and percussionist Tracy A. Morgan.

Dulcie Taylor learned a hard music lesson at an early age – don't leave your ukulele unattended in a porch chair at the beach. Some clueless teenager can sit on it and smash it to bits. The demise of her ukulele was a tough moment for 10-year-old Dulcie, but that Christmas her Mother bought her a guitar, and Taylor's lifelong love of singing and songwriting began. In hindsight, a grown-up Taylor sees the smashed ukulele as something of a blessing in disguise. Since then, she has added the mountain dulcimer to her instrument collection and shared the stage with a long and impressive list of artists, including Jerry Lee Lewis, Asleep at the Wheel, Guy Clark, John Gorka and Kathy Mattea.

Taylor launched her recording career in 2000 with the self-released title, "Other Side of the Bed." Immediately, her work was noticed and praised by her peers, and her subsequent award-winning CDs and songs began to receive substantial national airplay. She now has six albums to her credit. Critics praise her "compelling voice," and call her "a poet, a romantic," and "a gifted writer and storyteller." Some of the words that have been used to describe Taylor include, "mesmerizing," "smart, witty, and heartfelt."

Dulcie Taylor hides no more. She and her two performing partners, Nauful and Morgan, regularly play to enthusiastic audiences all over the country. Her return to Tehachapi is long overdue. Happily, that will be remedied on Feb. 23.

Fiddlers Crossing is at 206 East F St. at Robinson St., in Downtown Tehachapi. Tickets may be purchased online at http://www.fiddlerscrossing.com, or at Mountain Music, Tehachapi Treasure Trove, Tehachapi Furniture in Old Town and Lucky's Barbershop. They may also be reserved by calling (661) 823-9994. Tickets to the concert are $20, and as always, coffee and goodies are included. The concert begins at 7 p.m. Doors open at 6:30 p.m.

Samples of Dulcie Taylor's music may be heard at http://www.fiddlerscrossing.com and http://www.dulcietaylor.com.