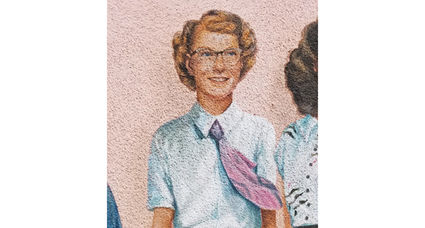 I used to see Sally Lange in her father's shop on Green Street. It was called Lange's Radio and Electric where he stocked electrical supplies and sold and repaired televisions, stoves and refrigerators. Her mother, Zella Moore Lange, also ran a small gift shop within the store. When one speaks to a "dyed-in-the-wool" Tehachapi-ite, thoughts come to mind that the older resident has seen a lot of changes. Better than that, it's good to have someone around who can straighten people out when they quote local history incorrectly.

Zella Moore and Emil Lange were married in 1927 in Bellingham, Wash. where their families had lived for some years. It wasn't long before the couple was on the way to California; more specifically, the Tehachapi area. Emil's brother, Al, had preceded the couple here and sent word that they should travel south to try things out. At one time the two brothers had a construction business and built many fine homes and commercial buildings in the city of Tehachapi. Emil was a big man and people began to call him "Heavy Lange" because of his size.

In 1935, Zella and Emil welcomed the birth of their daughter, Sally, who was born in the new Tehachapi Hospital opened in 1934 by Drs. Madge and Harold Schlotthauer; both fine physicians and skilled surgeons. The doctors had purchased the old two story Capdeville Hotel which proved to be an ideal site for a hospital. Dr. Madge and Dr. Harold (always known by their first names) were to treat generations of local citizens before retiring and selling the hospital in 1969. As Sally grew up she leaned toward the medical field and worked for the two doctors for 18 years.

During the later Depression years, Emil found employment at the Monolith Portland Cement Company's Gypsum Plant in Old Cuyama, Calif. The gypsum was mined and crushed then loaded on trucks and taken to Maricopa where it was loaded on a train that would take it to the plant at Monolith.

Zella and Sally went with Emil and stayed during the week in living quarters available for workers. Then, on weekends the three came home to Tehachapi to do laundry and household chores at home. This arrangement found Sally needing to attend first grade at Apache Elementary in Old Cuyama where there were five students in attendance of various grade levels. Zella had to drive her daughter 15-miles each way to class daily. Occasionally, it would rain and the roads would be impassible from the plant and Sally would spend the night with her teacher. The rest of her schooling was within walking distance in Tehachapi.

It was in 1946 that Emil opened his store on Green Street in a vintage brick structure next to the BeeKay Theatre building. In those days the television reception was caught by antennas atop the house. No cable yet. As a result, in the latter part of the 1940s not too many in Tehachapi had TVs. Emil Lange, on special sports events, would place TV sets facing out of the store window to the street so people could stop by and view boxing or football; sometimes Roller Derby; a great favorite at that time.

The building was destroyed in the 1952 earthquake.

Sally, exposed to the business field all of her life, was to take part in her own social and academic activities in high school, such as editor of the Annual (later called Yearbook), student body secretary, Band (played the clarinet) and Girls Athletic Association. Since her father was a Mason she was a Rainbow Girl and in her senior year was the state officer.

Sally's picture appears on the BeeKay Theatre Mural. Her life was spent in her parent's friendship with Mr. and Mrs. Lou Kanstein who knew and loved Sally from birth. She would help Mr. Kanstein at the BeeKay on occasional matinees and evening showings.

After graduating from Tehachapi High School she kept herself in the working force. She married Carlyle Liebel whom she met in high school. They were to have two children: Carlyn Liebel Granthem, who also works in the medical field like her mom. Carlyn, after graduating from Sacramento State lived in San Jose for 38 years, but she and her husband, Dennis Granthem, who also has a Tehachapi beginning, moved back home to Tehachapi in 2018. Sally's son, Brian Liebel lives in Florida and is an energy consultant with a lighting design company. Sally gives information that the entire Liebel family was involved in bowling leagues with friends and also just for recreation. Tehachapi once had a fine bowling alley. Carlyle Liebel was to pass away in 1985 after 32 years of marriage.

After working for the Kern County Health Department for 20 years Sally retired. Her many volunteer jobs kept her from getting "bored." Even after her own children were grown she continued to volunteer as an adult adviser for several youth groups. She has always considered that working with children and young people can be an important part of a child's life. Now that she is quite eligible to attend the Old Timer's Reunion, we find her on the Board of the Senior Center, a member of the Heritage League, as well as a member of the Hospital Guild and Masonic Orders.

Sally would marry Pete Errecart, another lifetime Tehachapi resident, and with this marriage she says she gained a wonderful extended family. The combination of their knowledge of Tehachapi history was beneficial to those listening. Pete passed away in 2001.

A message from Sally: "I have seen so many changes in the past 83 years: I recall never locking one's front door, vacant lots to play in, summer recreation programs at the city park, summer dances where we learned to dance, hiking and riding our bikes and so much more. Our parents did not need to worry. There's much more, but especially the friendships we made in our small classes at school have still continued all through the years. My high school graduation class of 1953 still has a reunion every five years.

My hope for the future of my home town, Tehachapi, is that it will continue to grow responsibly as it has in the past."

Is it any wonder that she was asked to "Cut the Ribbon" that signified the Grand Opening of the new Tehachapi Hospital?