Kieffe and Sons Ford closing after 59 years in Kern County 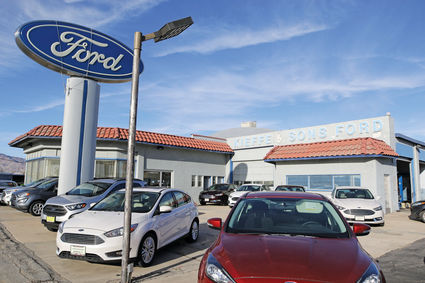 The Mojave headquarters of Kieffe and Sons Ford still has stock on the lot but even that will be going away soon as Kieffe and Sons close their doors after 59 years in Mojave and many in Rosamond as well according to Rick Kieffe current owner and son of founder Bob Kieffe.

Kieffe and Sons Ford dealership is closing its doors on its two locations in Mojave and Rosamond after 59 years in business in Kern County, according to Owner Rick Kieffe.

He confirmed the rumor going around that the iconic and longstanding dealership that has been selling cars and trucks for 59 years is in fact closing for good. He stated the cause by simply saying "the Future has arrived." By that he explained that the modern means of purchasing automobiles has changed so drastically that the individual solo dealer, of which there are only about 3,000 independent dealerships or "little guys" as he put it, left, and that even Ford MOCo itself prefers the new format for selling cars. And what is that? Auto Malls, Carmax lots with thousands of used cars to choose from, Carvana- massive online site that also finances their cars online. Their motto is "skip the dealership."

Then there is Vroom-a car buying site where you can actually find a car you want, buy it online and have it delivered to your door. Kieffe stated that the auto malls with excess stock in every color imaginable, flashy showrooms with food courts, etc., simply have outpaced the individual operator over time, and now are the expected norm.

Kieffe stated that while he can still sell cars at a lower cost than those larger flash operator auto malls, people nowadays want that glitz and show. Online sales of used cars is also very popular right now, as well and those sites don't have the overhead of brick and mortar, service department salaries and sales commissions, etc. Such seems to be the way of the world today.

It's a heartbreaker for all involved and the community at large, most of whom still aren't aware of the closure now underway. Kieffe stated that the day we spoke with him (Feb. 7) he was on his way to Rosamond to collect the last three cars on that lot where cars have been sold for many years. It is located almost at the mouth of the Edwards AFB entrance off Rosamond Boulevard and Sierra Highway.

Part of the heartache comes in the form of the people who have been there for so long said Kieffe, like Jesse Valadez, who has been an employee for 51 years. Others have been employed at Kieffe and Sons for decades as well, and that only adds to the sadness of seeing such a longstanding and established business go under after nearly 60 years. Like Sears and Kmart to follow, it's all about consolidation said Kieffe, a longtime resident of Tehachapi. When Kmart came to Tehachapi he said they closed down several businesses who couldn't compete with them. This is the nature of consolidation.

Any way it is explained it is a sad day for Kern County and especially East Kern County where many regional law enforcement and fire departments bought fleet vehicles from Kieffe and Sons. They have been supplying such agencies for decades. Now they too must find a new outlet for such purchases, causing a shift in purchasing dynamics for already cash strapped and short handed agencies all across Kern County looking for ways to save money.

We say farewell to Kieffe and Sons Ford Mojave and Rosamond after 59 years of Fords and thanks for the memories. We wish them the very best in their future endeavors.