... and Tehachapi Community Theatre actors are going to make sure you leave the BeeKay knowing the right pronunciation.

"It has been a blast and really fascinating to see how everything is coming together. From costumes and props and acting ... it's like a snowball that is starting to roll," said Liz Block, who is in charge of costumes for the play.

The production's Director, Gary Michael Mazzola, who also serves as the TCT technical director, said this has been a really exciting group of people to work with and everyone is putting their all into this hilarious show.

"This has been such a group effort," he said. "There are really talented people working with me."

Not only are the actors bound to make you giggle and leave the theater humming a few memorable tunes, but the new technology at the BeeKay will transport the audience to the middle of a Mel Brook's movie set. A new 10- by 20-foot movie screen has been installed behind the stage. Video and still scenes will transform the BeeKay into medical labs, Dr. Frankenstein's laboratory and the Transylvanian countryside.

As you can see in the photos here, the screen isn't pulled tight yet, but it will be all ready come opening night. The screen first appeared during TCT's production of "Sherlock Holmes and the Case of the Christmas Carol" last year. In that production it was only used occasionally throughout the performance. In "Young Frankenstein" it is the biggest player on set.

"This is like rehearsing in front of a green screen," Mazzola said. "We didn't really know what to expect when we began. But it's going great."

One of the things that makes this production great is the wide-range of experience and backgrounds of the actors. From local high school students, music teachers and business owners ... you'll see the talents of newbies who were just looking for something exciting to try and experienced actors who have set many a foot on the BeeKay stage. And you'll definitely see a cast of actors enthusiastic about bringing one of their favorite stories to life.

Amy Rodriguez, a music teacher at Mountain Music, is enjoying her first TCT production, especially as a "Young Frankenstein" fan.

"The fantastic quirky characters, as well as the perfect comedic punch lines executed precisely," she said, explaining why this is such a great musical to be apart of. "I've never been in any play/musical in my life...unless you count my dog, Corky, who played Toto in a college production of 'The Wizard of Oz.' I took her to every play practice, dropped her off with 'the wicked witch.' She was the star of the show. Even had to do Toto signatures." 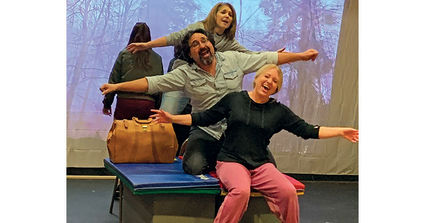 Guy Martin, along with Jamie Uthof, Inga, and Chris Morales, Igor, sing as they travel the Transylvanian countryside during a rehearsal for "Young Frankenstein."

Alaina Trindle, 16, is looking forward to attending CalArts after high school, but for now is enjoying performing at Tehachapi High School and now her first production with TCT.

"I'm really loving this and the family the theater brings," she said.

This is the first in a series of shows at the BeeKay Theatre that have "sponsors" and "producers." Nick Altieri is the producer for "Young Frankenstein." A partnership with Tehachapi Valley Recreation and Parks District will be bringing the "Missoula Children's Theatre" to the BeeKay later this year.

TCT reminds the community that "Young Frankenstein" has a PG-13 rating.

Watch for The Loop on Feb. 16 for a closer look at the primary characters and more photos from this entertaining cast.