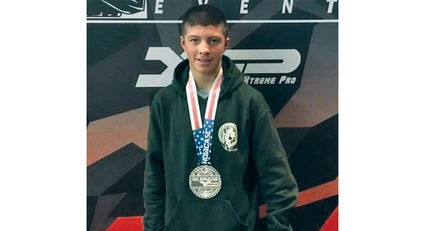 Tehachapi Valley Wrestling Club Wrestler Michael Murillio recently competed in the USA Folkstyle Showcase Tournament, Jan. 5 in Anaheim. The Showcase Event is one of the toughest West coast events with wrestlers from throughout the Nation competing. Michael lost only 1 match in the 12 and Under Division. He lost in the Semi-Finals to Landon Sandoval from New Mexico, who went on to win the Division. Micheal stayed focused and pinned his way through wrestle backs to be able to challenge for true second place, which he pinned that opponent as well and earned 2nd Place honors.