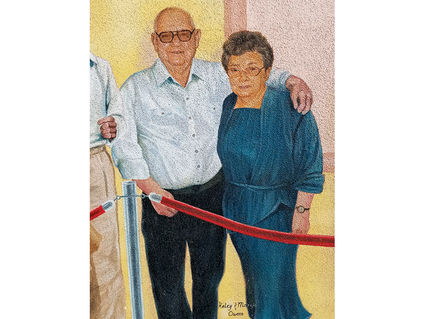 Taking another look at the BeeKay Mural one may see Margie and Kelcy Owens, two citizens who managed to carve out a legend for themselves and for local citizens by simply opening a café on Main Street, Tehachapi. I say Main Street for that is what we "locals" always called it. Sometimes we could remember it was G Street, but mostly just Main. Whatever the name of the street, the name Kelcy's Café made its own reputation as a family restaurant. The minute one walked in you knew you were home as several people would greet you and call you by name.

When doing docent work at the local museum people would come in for information about the well-known Loop and then ask where the restaurant was with the good food and that had all of the wonderful historical photos and memorabilia in its dining room.

As the "legend" began, it was hard work with Margie running the café in the day while Kelcy worked his regular job at Monolith Cement Plant. When his shift ended he would relieve her and take the night shift. I think they closed at nine in the evening. Their daughters, Kathy, Helen and Elizabeth were able to take turns in helping out as waitresses, when not in school. Kathy was to finally end up running the business with her parents and then by herself without them as they aged.

Talking to Kathy to get a few facts straight found us reminiscing for about an hour. It's fun to talk "Tehachapi" with someone who also remembers the same events without my first having to tell them the story so they can understand the conversation.

Now that you know the end of the story let's begin at the beginning. Marjorie Mae Marchand was born in Tehachapi where she would live her whole lifetime. When only six months old her mother, Elizabeth, was to die from the effects of surgery leaving her to be raised by her maternal grandparents, John and Ernestine Yorba. The whole town adopted her as "little Margie" and much attention was showered on her from aunts, uncles and close neighbors. When walking with her grandmother, Ernestina (called Ernie by all) someone would call out, "There's little Margie" and she would greet them with her little girl smile.

Her grandmother was Ernestine Leiva before her marriage to John Yorba and was a sister to the well known Leiva brothers who were vaqueros at the Tejon Ranch. Brothers Jack and Doro were to leave Tejon and open a Richfield Gas station in Tehachapi and would stay in business for fifty years.

Margie's grandfather, John Yorba, also descended from a famous old California family. He and Ernie were members of the local Catholic Church and saw that their granddaughter was well versed in her religion. She was to meet the love of her life, Kelcy Owens, while attending Tehachapi High School.

Kelcy Owens had to travel a long way to meet his future wife. Life in Antlers, Oklahoma was not to his liking. No future, he said. So, he told his parents he was going to California and did they want to come along, they agreed. Thus, he ended up living with his parents, Mae and Ruben Owens, in a tiny house on Cherry Lane and becoming a student at Tehachapi High School. I recall Kelcy as a nice person and one grade behind me when I was a senior. I recall he always had some sort of car that he was driving. Not all high school boys had cars. He and Margie were married when she was only seventeen and people said it wouldn't last. It not only lasted (59 years) but they were known as hard working local citizens. Margie was a staunch supporter of the hospice program in the community and Kelcy became a civic leader as well as mayor of his adopted town. Described by friends, he was a man well liked and a man who could get things done. He had a town full of friends. He, like so many businessmen in town, was a Warrior Booster and on game night was out there on the bleachers. Kelcy always made it known that on game day any Warrior could come in before school for a free breakfast. I never met anyone who did not admire and like Margie and Kelcy.

Margie was to pass away in 2012 and Kelcy in 2008. Hats off to a couple of people who stand tall in the archives of Tehachapi.

Note: One day I came to Kelcy's for lunch and noticed Sonora Bean Soup written on the little luncheon special board. I asked him if it was good. He said I should definitely have some.

After lunch I told him it was very good. He replied, smiling and delivering a "scripture-like" reply, "If it were not so, I would not have told you."