Red Apple Pavilion gets the go-ahead 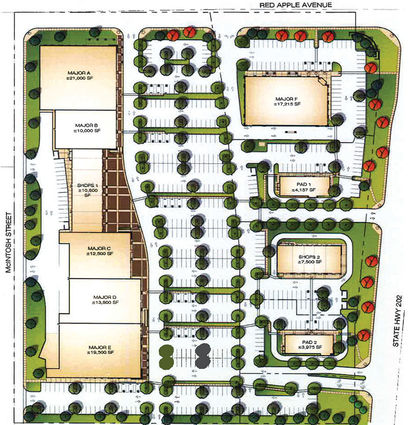 The long rumored Red Apple Pavilion came closer to becoming a reality when the Tehachapi Planning Commission approved the architectural design and site plan at their Dec. 10 meeting. Tehachapi City Planner Trevor Hawkes presented the concept drawings for the 120,455-sq.-ft. multi-tenant commercial center to be located on the 14-acres on the southwest corner of Tucker Rd. and Red Apple Ave.

The project is to be completed in two phases. Phase I: about 33,000-sq.-ft. will be completed first and consist of four stand alone businesses and parking along Tucker Rd. Phase II: approximately 88,000 sq. ft., may take as long as 10 years to complete. Phase II will back up to McIntosh St.

The builder, Tehachapi Holdings, LLC presented their primary and alternative plans stating that currently they are leaning toward the alternative plan as they have potential tenant interest at this time for the corner pad. It would consist of an eight pump gas station at the corner and three entrances located on Tucker. One entrance with a signal would be shared with Walmart. Phase I would have one entrance on Red Apple with a second added for Phase II.

Three other pads are planned for Phase I. According to Tom Carpenter of Tehachapi Holdings, Pad 1 would be the gas station, Pad 2 Carl's Jr., Pad 3 has no tenant yet and Pad 4 is expected to be Panda Express. The architecture of the center is planned to be mountain-appropriate with wood and stone accents.

Brad Perrine of EcoTierra presented the completed Environmental Impact Report (EIR) and Development Services Director Jay Schlosser said that the project complies with the Tehachapi City Master Plan. The project was unanimously approved although Commissioner Charles White was "not really excited" about having a gas station on the corner.

The Marriott Towne Place Suite project proposed by Tehachapi Lodging, LLC was continued to the January meeting. The commissioners felt that the architecture of the three story, 82 room hotel was not in keeping with the mountain feel the commission looks for. They assured Schlosser that a complete redesign was not needed, just a change of materials with the addition of stonework or wood to soften the look of the facade.

On a more routine note, the Commission passed an ordinance adopting the Capital Hill Specific Plan that had been discussed during their last two meetings. The plan identifies areas of Capital Hills to be set aside for residential and commercial development. Western Propane Services also received approval for signage at their proposed facility on West J Street.