Wreaths Across America celebrated in Tehachapi 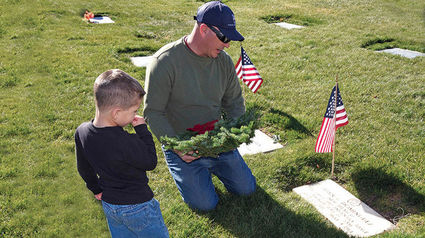 Jason Stanley shows his son Caleb Stanley, 4, the importance of the placement of the wreaths honoring all deceased veterans nationwide. Over 700 wreaths were placed at the two local cemeteries.

Wreaths Across America is an annual national observance celebrated by communities in respect for all deceased veterans, everywhere. This year it was held on Dec. 15. The observance is in REMEMBRANCE of fallen veterans from all wars, conflicts, or police actions. The placement of wreaths HONOR those veterans who served their country, often unseen, with quiet dignity and full allegiance. Generational in its observance, it helps to TEACH the value of freedom. 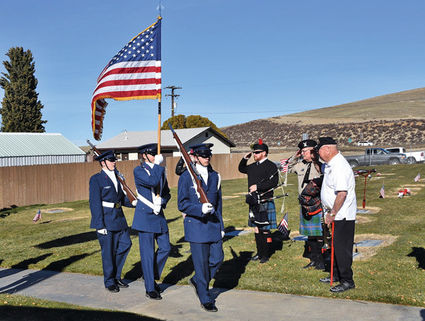 The Tehachapi Squadron of the Civil Air Patrol as they post the colors at the ceremony.

The holding of these national ceremonies and the placing of wreaths at each veterans' final resting place, fulfills the Wreaths Across America mission statement of: REMEMBER, HONOR, TEACH.

In Tehachapi, nearly 700 wreaths were placed by veterans and local volunteers at the community's two local cemeteries, and at Freedom Plaza the evening before where one member from each branch of the military was on hand to place wreaths at the base of each of the military monuments.