Shop with a Cop has successful 4th year

Shop with a Cop

A pre-shopping photo opportunity was called for before the holiday shopping spree began.

All TV screens in the Police Department Community Room were playing the cartoon "Santa Claus is Coming to Town" and all that could be heard were the excited voices of the 22 boys and girls who knew they were going to have a pizza dinner and then go Christmas shopping at Kmart with their law enforcement escorts. The Dec. 13 event was held for the fourth year here in Tehachapi and the seventh year all across the country. The Tehachapi Police Foundation was the primary organizer of the local event.

Twelve girls and 10 boys from kindergarten through third grade were selected by the staffs of Tompkins, Golden Hills and Cummings Valley Elementary Schools. They were each assigned to an officer from the Tehachapi Police Department, Kern County Sheriffs Office, California Highway Patrol, CCI or Union Pacific Railroad Police. All the officers donated their own time for the event. M&M Sports designed red t-shirts and donated one for each child.

The kids devoured pizza from Hungry Howie's and before they were finished, who should show up but Santa Claus who sat for photos and listened to the wish list of each child before moving on to his other holiday chores. During dinner, some of the officers even made shopping lists with the young shoppers. TPD Officer Elizabeth Place said she had a notebook for just that purpose. Each officer brought a patrol car (outfitted with car seats if needed) to transport their charges to Kmart with lights flashing and sirens blaring all the way from the Police Station to Kmart. They were all met at Kmart by Customer Service Manager Mina Tribble who sent them all off to do their shopping at a generous discount. 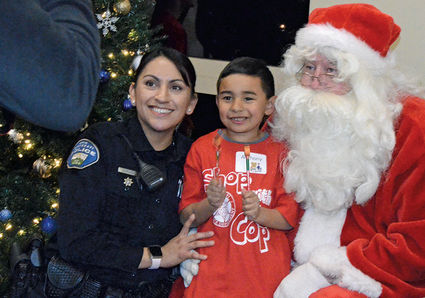 Santa arrived, and each young shopper had the opportunity to talk one-on-one with him, as well as have their photo taken with the man in the jolly red suit.

Police Foundation Vice President Kim Nixon said, "We are all so excited to be partnering to provide this event for kids in our community.  Relationships with law enforcement officers and children is a great way to build strong partners for the future."