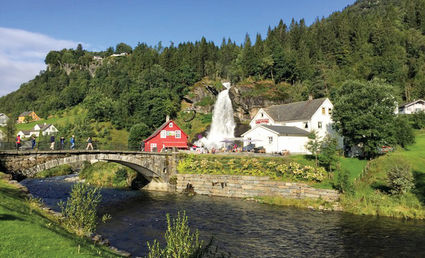 Farm and waterfall along fjord east of Bergen.

In late August, George and I took a Norwegian fjord cruise for two weeks, with the expert guidance of Travel by Jenni. But that ship was too big for us - 3,000 passengers! We had to take long, long walks to get around. Norway is a beautiful country though. We included stops both ways to visit my brother and his family in the east and we were gone three weeks.

My favorite fjords and scenes on the cruise were the world-famous Gerainger fjord and the fjords east of Bergen along with their Alp-like mountains with glaciers. Gorgeous! We did pay extra to take these excursions plus three others, and it was worth it. My favorite ship moments were the two evening shows where Phillip Brown (the Lion King lead on stage in London) sang and told his story. He used to be a bus driver, and a friend talked him into auditioning for the wonderful role along with about 1,000 other hopefuls. His voice is a stunning bass and he was selected out of all those applicants! I am going to order a CD or two of his.

Now for the Glitches...

• The night before we flew out of LAX, our family dined at a steak house. One of us choked on a piece of steak nearly derailing the entire venture. We all knew the Heimlich Maneuver and it saved the day!

• While visiting our cousins in Baltimore, I sat in a chair too long, got up on a foot that had fallen asleep and crashed to the ground. Luckily, no bones broken.

• While waiting for our luggage in London Heathrow Airport, one of us took a little walk, went through a door, and then was not allowed to return! It was against security regulations. It took the other one of us (pulling around six pieces of blue luggage) a long time to finally locate an airline agent and get help. She went out that one-way door and found the missing person, came back and got us both together, just in time for the cruise shuttle bus deadline. Again luck was with us!

• While on the shuttle bus from Heathrow to the Southhampton port, I became too warm and jammed my jacket and both of our pocketed passports into one of our larger bags. We did not hear the announcement that we had to have our passports in order to board our ship! As we climbed off the shuttle bus, I could see our blue bags passing into a huge hall with thousands of other bags, and I am not kidding. I could not stop them, being on the other side of a completely opaque wall in the area. I told the nearest agent and she was able to reach a baggage handler who ran inside that vast hall, spotted our blue bags and brought them to me. I retrieved the passports and we ran into the embarkation building at the VERY LAST minute. We were the last to board our ship - good luck again!

• We took several excursions that required long walks to the buses awaiting us. At Gerainger Fjord, we were last to board the bus because we now walk slowly. All the seats were full except for two singles on the aisle and four in the very back. We went back there, of course, and sat down in a window seat and the one next to it. A tall man approached us and told us that we couldn't sit there because he was a large person and needed extra space. I couldn't believe it and did not move. The man said some ugly things to me and then the bus started up a winding mountain road. This man then did an amazing thing: he dug his elbow into my hip bone, pushing hard and really digging in each time the bus took a turn. It really hurt! My eyes watered but I didn't budge. (I kept all this activity from George to prevent a fist fight!) A good half hour later, the bus stopped at the mountaintop where there was an amazing view of the fjord below and our tiny ship in the water. I got off the bus after the man. When I returned to the bus, I wondered if I was I willing to have this painful action continue all the way down the mountain. I finally decided to smile and sit in an open aisle seat. What would you have done?

• Norway was quite cold most days, especially above the Arctic Circle. I left my down jacket in the dining area with my cell phone in the pocket after lunch. We went outside to sit in deck chairs, and after about an hour, I felt cold and suddenly missed my jacket. I ran back to the dining area and my jacket was STILL THERE! Again lucky me!

• After we returned to London, we took a plane to Charlotte and were met by my nephew. We were on our way to his house, about 30 minutes from the airport, when my cell phone rang. I almost didn't pick up the call because it was an unfamiliar number, but I did. An upset man told me that he had my suitcase and thought I must have taken his! Our dear nephew got on the line, arranged a meeting place in the airport parking garage and drove back there. We exchanged identical suitcases. Again luck was with us!

All of these glitches were somewhat preventable. I certainly learned a few lessons!