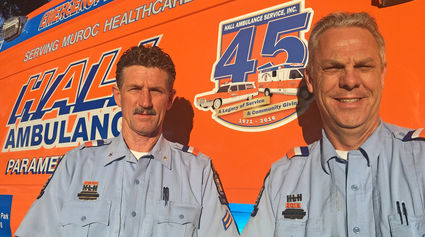 A Hall Ambulance Paramedic and an EMT serving the desert community of Boron, Calif., were among 33 EMS workers honored by the State of California Emergency Medical Services Authority (EMSA) Dec. 5 at the Marine's Memorial Club & Hotel in San Francisco.

Paramedic Ken Sexton and EMT Donnie Self were recognized with a Community Service Award for spearheading what has become an annual tradition – the Boron Senior Center BBQ, which is looked forward to by the locals while raising funds to support the facility. This year's event marked the tenth year of the BBQ fundraiser, and the biggest yet according to Charlene Sims, manager of the nonprofit.

"I am deeply touched by the efforts of our paramedics and EMTs serving Boron and their dedication to this annual event which supports this community asset," said Lavonne C. Hall, president, and CEO of Hall Ambulance Service, Inc. "Their actions further the concept of Care, Compassion, and Community that was introduced by my late husband, Harvey L. Hall, the founder of Hall Ambulance."

The relationship between the EMS crews and the senior center dates back to 1994 when Hall Ambulance began providing service to Boron through an agreement with the Muroc Healthcare District. Seniors make up approximately 1/3 of the community's population, and the center provides these golden-agers with the opportunity for social interaction and activities to keep them involved.

From early on, the ambulance crews were invited to stop by and enjoy lunch in appreciation of the emergency medical services they provide to the community. In return, the ambulance personnel started providing complimentary blood pressure checks during the program's hot lunch meals served on Thursdays. On more than one occasion, their good deeds have resulted in detecting a health-related concern for one of the members. "We have actually found medical issues during the blood pressure checks that required transport to the emergency room," Paramedic Sexton said.

Wanting to give back, Paramedic Sexton and EMT Self decided to start an annual BBQ hosted by the ambulance crews assigned to Post 17 in Boron. Their grassroots efforts are completely planned, coordinated, and organized by these community servants, who graciously donate enough money each year to cover the cost of the food so all of the proceeds can go back to the senior center.

The impact of this community engagement project has been very beneficial for all involved. Not only does the Boron Senior Center benefit from the annual BBQ fundraiser, but the senior citizens and the Paramedics and EMTs have also developed very strong friendships which are mutually beneficial. "We started the BBQ for the seniors to give back to them," Sexton said, "They are in their golden years and deserve to be respected."

In addition to the recognition Sexton and Self received for this project, Paramedic Field Supervisors Steve Prater and Mike Zapiain; Relief Supervisor James Metzger, and EMT Manuel Martinez will be honored locally with a Certificate of Commendation from the Emergency Medical Services Authority for their participation in the Boron Senior Center BBQ.

In a news release from the California Emergency Medical Services Authority, Director Dr. Howard Backer stated, "These men and women epitomize the spirit of caring and commitment to quality healthcare that embodies these awards. They deserve official recognition for their contribution in making California's EMS system one of the best in the world."