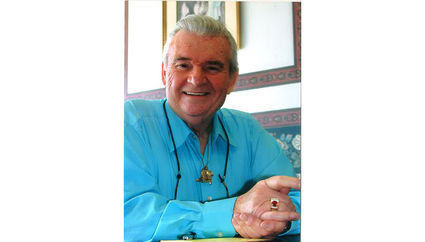 In March of 2017, The Loop published an article documenting the life of famous Hollywood manager and current Tehachapi resident Dick Baxter. Baxter is best known for his many years in Hollywood as the personal manager of Dale Evans, Roy Rogers, Kathryn Grayson and many other talented performers. However, most people don't realize that he is also a very talented song writer. During that 2017 interview, Baxter talked about one Christmas song that he had written many years ago and had been looking for the right producer and artist to include the song on a Christmas album. This year the combination finally came together and "Miracle of Miracles" has been released on YouTube and is part of a Christmas album produced by Jesse Hanna and the Range Riders.

According to Baxter, "Miracle of Miracles" first came to him one day in 1967 as he was walking into his Encino office. He said he composed the entire piece in 19 minutes in the form of a poem. He knew he wanted to set it to music and perhaps present it to Capitol Records or another recording company to be part of a Christmas album. It was Dick's wife Ellie who eventually supplied the tune. One day on a trip out to Apple Valley to visit Roy and Dale, Dick heard her humming a tune that fit the lyrics perfectly. The producers at Capitol loved it but it still needed just the right artist to perform it.

Fast forward to 2017 and lead singer for the country group Range Riders, Jesse Hanna, heard the song and loved it. Hanna thought the song would be a perfect fit for a new Christmas album he was thinking of producing. Hanna, who owns Silver West Records, said he wanted to do an album that would reflect the true meaning of Christmas. He heard Baxter's song and thought the lyrics were a perfect fit. The Range Riders, a group going back decades and sustained by the Hanna Family, recorded "Miracle of Miracles" as part of their newly released "The Miracle of Christmas" album. Hanna and Baxter made the decision to record the song in the standard Country style as opposed to a more "pop" genre and the result is stunning. "Miracle of Miracles" could very well become a brand new Country Christmas standard. "Miracle of Miracles" is currently available on YouTube at youtu.be/URvlOF5BLKU. The full album is available for download on iTunes, Spotify and available for order at most major music outlets. It is also available at http://www.RangeRiders.com.

Dick Baxter said he started writing lyrics when he was about 14 years of age while he was still in school in Indiana. He gives credit to one of his teachers, Pauline Swenson for encouraging him to write. Dick said one of his early unpublished ditties was called, "I'm going to rope myself a cowgirl from Texas." Another of his more serious early poems is titled, "It's a lovely night for lovers now and always."

After marrying the love of his life, Ellie, the Baxters moved to California where Dick eventually became one of the most respected managers in Hollywood. He formed Dick Baxter Publishing which is still active and licensed with ASCAP. He wrote the lyrics to, "Promises to Keep", a song set to music by Suzy Hamblen and published by Hamblen Music Company Inc. Baxter has also written a fascinating autobiography documenting his long career in Hollywood. For those wanting to know more about Dick Baxter, "Standing Tall in the Shadows – Memoir of a Hollywood Manager" is available from Barnes and Noble and on Amazon. He and Ellie will be celebrating their 63rd wedding anniversary on Dec. 9, almost unheard of in the Hollywood community.