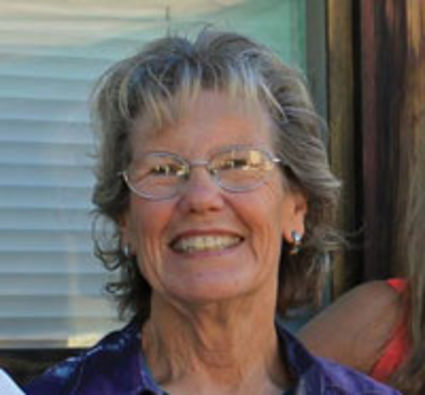 Aviation historian Giacinta Bradley Koontz recently moved to Tehachapi from Prescott, Ariz. where she worked as a columnist for aviation maintenance magazines, gave occasional public lectures at Embry-Riddle Aeronautical University and was commissioned by the city to create a display of local aviation history in the Prescott airport terminal.

A former resident of the San Fernando Valley, Giacinta sought to return and be closer to her friends and professional colleagues. She chose Tehachapi with two airports which offered her access to the aviation community, as well as the mountain forests and wildlife she loves. She bought a house designed like a Navajo Hogan in which she displays her passion for Native American art.

While working on a script for an aviation documentary in 1994 she became interested in the life of Harriet Quimby, America's first licensed female pilot (in 1911). Giacinta's degree in Anthropology and interest in history inspired her to study aviation and led to a new career. She directed a national aviation history conference, appeared on PBS and the History Channel and traveled giving multi-media programs. She has been known to refer to herself as an "aviation anthropologist."

Following the Northridge earthquake of 1994, Giacinta was hired to supervise the restoration of the Portal of the Folded Wings in North Hollywood which was once the entrance to Valhalla Cemetery. The 75-foot tall structure is made of marble, mosaics and many sculpted figures. Over a dozen American aviation pioneers chose to be buried beneath the Portal's dome, including the Wright brothers' mechanic, Charles Taylor. For six years, Giacinta directed a museum display within the Portal. Huell Howser toured the Portal with Giacinta during an episode of his TV show, "Visiting."

Since 2006, Giacinta has authored a monthly column in two worldwide publications: Director of Maintenance magazine and InSight magazine. In addition to contributing to dozens of non-fiction books, she has published four of her own based upon original research including a biography of Harriet Quimby; the history of the original Grand Canyon Airport; and a collection of short stories. In 2011 her book, "Pioneer Mechanics in Aviation" won Honorable Mention at the New York Book Festival Awards. [www.GiaBKoontz.com]

Giacinta has joined the Tehachapi Society of Pilots and her article on that group's Young Eagles Day was recently published in The Loop.[Article titled "Where's the engine?" on page 13 in the Oct. 27-Nov. 10, 2018 issue.] We feel very fortunate to have Giacinta here in Tehachapi and part of our aviation community. Welcome.

Tiffany and Brant Goodwin moved to Tehachapi from Lancaster in September. Tiffany said both of them had lived in the Antelope Valley most of their lives. Their initial plan was to move their family to Idaho, but both of their parents are Tehachapi residents and the thought of being that far away as they got older made them rethink that decision. They did actually try a move to Alaska for a short time, but Tiffany said that it was "just too cold."

Brant is the lead water treatment plant operator for the Antelope Valley East Kern Water Treatment Agency. He has worked with the agency for five years. Tiffany had worked as a manicurist and massage therapist in the Antelope Valley for 15 years, but is now homeschooling their three daughters.

Tiffany was born in Palmdale, has two sisters and a brother and spent the first five years of her life in Oregon before returning to the Antelope Valley. Her parents live in Sand Canyon and her father is local chiropractor William Emard, DC.

Brant was born and raised in Lancaster. He and Tiffany met at City Walk at Universal Studios. He is currently worship director at Westside Christian Fellowship in Leona Valley. At one time he was worship director for the Vineyard Church here in Tehachapi.

Their three daughters keep them pretty busy. Finnley is 12 years old and is a budding artist. Nine year old Avery is a competition gymnast and she is already planning for next year's team competitions. Piper, at 5 years old, will just be starting out in gymnastics next year.

Trying to help keep track of the girls is a Labrador retriever named Champ and a rescue teacup Chihuahua named Beauty. Beauty, however, does not hesitate to let Champ know that she is running the show and Champ doesn't argue.

To the entire Goodwin family, thank you for choosing Tehachapi. Welcome.