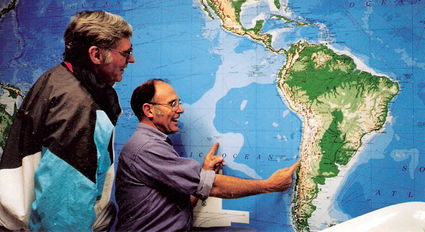 Mike and Dick with map measuring distances for their trip around the world.

I was reminded recently of the exciting and terribly hazardous trip that Mike Melvill and Dick Rutan undertook in 1997, flying their homebuilt Long-EZs around the world with the EAA Friendship Tour.

It all began when Mike told Dick that he wanted to fly his own homebuilt airplane to his hometown in Johannesburg, South Africa. Mike's wife, Sally, decided that crossing the Atlantic Ocean wasn't something she looked forward to, so she decided that she would stay home for this adventure.

Sally was very involved in the building of both of the Long-EZs and was a licensed pilot who had flown aircraft from Mojave to Oshkosh for the annual EAA AirVenture events over the years.

Mike asked Dick if he would like to fly along in formation. Dick's replay was, "That's half way around the world – why don't we go on around the whole world!"

There are many Experimental Aircraft Association (EAA) chapters around the world, so the trip quickly became a tour from one EAA chapter to another.

They had to plan a route that would be doable for their little homebuilts. Finding the shortest route across the Atlantic posed a problem, but they finally agreed on a route.

They departed Mojave on April 4, 1997 and headed east. They crossed all the world's oceans, visited 14 countries, traveled more than one and a half times the distance of the equator, and returned home to Mojave on June 24.

We had a wonderful homecoming celebration for Mike Melvill and Dick Rutan at the Hansen Hangar when they returned. So many talented friends and family members pitched in to help make it an event to remember.

A small group of friends were at the airport waving American Flags and cheering when Dick and Mike landed on June 24, 1997. We were thrilled to see them in formation coming over the top of Mojave Airport's original tower, from the south.

Tonya Rutan, Kelly Hall and I thought it would be a neat idea to help Mike and Dick celebrate their safe return and allow all their friends and fans to join in to hear about their adventuresome flight around the world. They flew the Long-EZs (pronounced Long-Easy) that they built side-by-side many years ago. In fact they were the first two Long-EZs ever constructed. We called the get-together the EAA Friendship Tour "Around the World in Eighty-Nights!'

Mike and Dick took turns telling about the frustrations dealing with customs in the countries they visited. One airport in Africa wouldn't let them land because their facilities didn't open until 8 a.m. They had just flown for 14 hours over the Atlantic Ocean and arrived there at 6 a.m. They had to circle for two hours or pay a $900 fine each. Now that's outrageous!

Another place made them fly to another airport and taxi the aircraft for 3-miles to pick up one piece of paper from customs that could have been faxed to them at the original airport. Little-minded people exerting their power. Bureaucracy in any country is the pits; each little office is run like a dictatorship.

Mike painted names of all the places they visited on this remarkable flight, the date that they left Mojave and the date they returned. Next time you see his Long-EZ, N26MS, check out what is painted on the aircraft.

It's fun to know people who are driven to pursue such an intrepid adventure that others only dream of doing. There was no fun in the terrible storms they encountered – just pure terror!

Mike said people kept asking how they stayed awake during their long legs over the ocean – his reply was simple, "You can't sleep when you're terrified!"

Over 200 people had gathered at the Hansen Hangar to hear this amazing story. Thank you Mike and Dick, everyone enjoyed your talk immensely and were so thankful for your safe return. 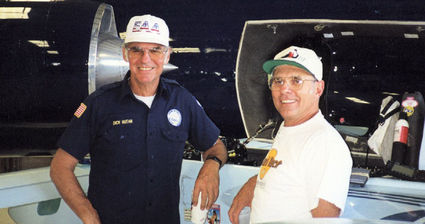