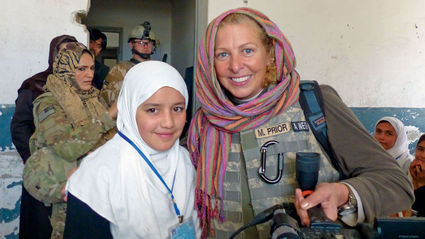 The Nov. 13 meeting offered inspiring speaker Meg Prior, a photographer/film maker who has been deployed to Afghanistan for 10 years in spurts of a few weeks to several months on occasion. Her purpose has been to film the encounters of the armed forces there, and has actually documented all seven branches over that time.

Because we are the American Association of University Women, she focused this presentation on the roles women have played during that time.

Her first deployment was in 2010, and has since gone over pretty much every year. Because she had not formed an opinion on the war, the military welcomed her impartial view of the conflict.

Women in the forces are considered the enablers, but not in a bad way. Back in 2010, they were not in combat, they were medics and other supporting positions and were often utilized to communicate with the women of Afghanistan and to build a relationship with them. One year the women in the military started a project in a particular town, for example, to help women set up and build a co-op where they raised chickens for eggs, and also raised honeybees for the honey. This aimed to be a profit-making venture for the local women. The Afghani women actually did the work, learned the skills they needed and are continuing without the aid of the military. It has been considered a highly successful venture on both sides of the aisle.

Military women are now taking a much more active role in combat and leadership in Afghanistan. And with it they have gained tremendous self-confidence, plus the respect of their male counterparts.

Thank you to Meg Prior for this inspiring presentation and for having the courage and resolution to keep going back and giving us a fresh insight into the conflict and progress there.