You did it, Tehachapi! Hospital opens

The opening of the new hospital in Tehachapi on Nov. 7, 2018 marked the culmination of a long, bruising battle to see the project to completion.

"I had many sleepless nights," said Dr. Sam Conklin, 82, board member of the Tehachapi Valley Healthcare District, which built and owns the new hospital, now operated by Adventist Health Tehachapi Valley. The old hospital on West E Street, completed in 1957, was outdated 50 years ago, Conklin said, when he arrived in Tehachapi to open his family practice in 1969.

It's been worth it.

"I think it's the greatest thing," Conklin said. "The results far exceed anything I expected. The building is outstanding."

The people of the district approved two construction bonds, one for $15 million and another for $50 million, yet the hospital faced funding challenges. The district jettisoned a first set of architectural plans, triggering a million-dollar lawsuit. A California Environmental Quality Act (CEQA) lawsuit delayed construction for a year and added $11 million to the cost. There was the constant threat that the state of California would shut down the existing hospital as the district struggled to meet deadlines for construction under rigorous new seismic standards.

Official groundbreaking on Mar. 28, 2013 followed a judge’s decision in favor of the healthcare district in the CEQA lawsuit.

To satisfy state authorities as to progress toward a new seismically compliant facility, Conklin recalled, the district began construction of the water tank first.

As the beautiful building emerged from the dust of a donated parcel on The Loop Ranch, optimism soared…until the project started to run out of money. Project Manager Stacey Pray put contingency plans in place to mothball construction. The district board talked about acquiring loans and about corporate infusion of funds. Nothing looked promising.

The healthcare district, under new CEO Eugene Suksi, sent out Requests for Proposal to find a partner. Adventist Health offered $27 million to finish the hospital in return for a 30-year pre-paid lease. Adventist would operate and manage the hospital. The affiliation deal was finalized as of Nov. 1, 2016. There were further delays to the opening as Adventist encountered unexpected challenges in construction issues that needed remediation. In all, including the pre-paid lease sum, Adventist has invested more than $44 million into the new hospital.

In a carefully choreographed plan, Adventist closed the old hospital and opened the new one seamlessly at the same minute on Nov. 7. 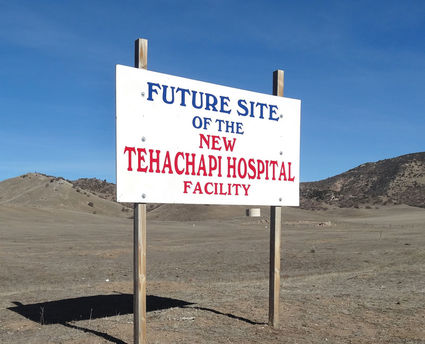 Jan. 1, 2013. The Broome family donated the 20 acres of land upon which the new hospital is built. The gentle hills that surround the medical campus provide a soothing setting for healing. The Broomes own the 40,000-acre Loop Ranch.

Beginning at 7:07 a.m., Hall Ambulance moved six patients - four of whom were elderly, long term care patients - to their new home in the new hospital’s med-surg wing, where they will receive the same skilled nursing care they received at the old hospital. The move took half an hour. Adventist had promised that none of the district’s long-term patients would be abandoned.

As soon as the last patient was safely transferred, Adventist put up a “We’ve moved!” sign in front of the old hospital under the stately Deodor cedars, removed the Adventist sign and blocked the entrance.

Adventist is returning the old hospital and other properties on West E Street to the healthcare district, which now will pursue community healthcare needs on a wide spectrum. The district got the hospital built before the state of California could shut it down under new seismic rules, which is more than many old rural hospitals have been able to do.