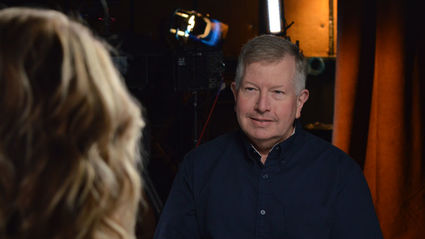 Chris Naftel being interviewed by Paula Zahn in her New York City studio.

While I was working on my Aerospace Engineering degree at Auburn University, I was enrolled in a work/study program with NASA. For four years I spent summers and winters in Hampton, Va. on work assignments for NASA.

I made friends with a lot of amazing people in the Hampton area, especially through a local snow skiing club. A group of us would go on ski trips during winter weekends and play a lot of sports and go on beach trips during the summer months.

One of the people that I became friends with was Olivia Christian. Olivia was an elementary school teacher and was one of the most unique and caring people I have ever known. She made sure everyone was having a good time, no matter what activity we were doing. Whenever Olivia was part of an activity, there was always laughter.

During the summer of 1981 I was completing my last of seven student intern assignments with NASA. Friday, Sept. 4, 1981 was my last day as a NASA student intern. I spent the day filling out forms and saying goodbye to the people I had been working with. My parents had come to visit me from Alabama for the weekend and I had dinner with them after work.

Police theorized that someone snuck into her apartment while she was outside after breakfast walking her cat and she was attacked when she returned to her apartment. A neighbor heard screaming but didn't think to call police or check to see where the screaming was coming from.

I will never forget that day. I was 21 years old and had never known anyone who had been a victim of a violent crime. I was devastated and so was our circle of friends. The investigators provided very little information about the case and we were left to wonder who could have done this. As the days turned to weeks and then to months and then to years, everyone who knew Olivia lost hope the case would ever be solved.

About three years ago, an FBI agent began to look at cold cases in Virginia and decided to reopen Olivia's case to take a new look at the details and the evidence. This FBI agent's efforts led to an arrest of a suspect in December 2015 and a conviction earlier this year, which was almost 37 years after the murder occurred.

Producers for the TV series, "On the Case With Paula Zahn" heard about Olivia and decided to dedicate an episode to her case. In July of this year, I was contacted by one of the producers and I was invited to New York to tape an interview with Paula Zahn to talk about Olivia and the impact her murder had on the people that knew her. Several other people, who were involved with solving the case, were also interviewed.

Chris Naftel is a resident of Bear Valley Springs and he is the President of the Rotary Club of Tehachapi.