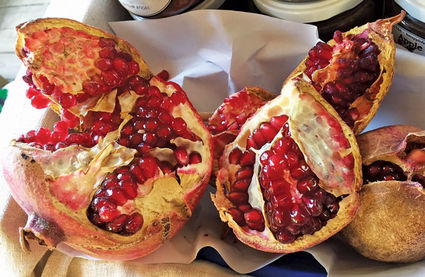 Pomegranates are in season through springtime at Ha's.

Ha's Apple Farm on Steuber Road is becoming well-known locally for their apples, pears, peaches, plums and grapes as well as their fruit based preserves, dried fruit, juices and vinegar. However, also available at Ha's are some lesser-known fruits that are known for their medicinal properties. Though relatively unknown in Tehachapi, these fruits are very much in demand throughout the Asian community.

Pomegranates are probably the best known of the medicinal fruits and are considered one of the healthiest fruits on earth. Inside the thick and inedible skin are hundreds of very sweet red seeds which can be eaten raw or made into a juice. They are sometimes used in teas. Those seeds are filled with punicic acid and antioxidants – three times more than is found in red wine or green tea. Pomegranates have anti- inflammatory properties and are rumored to fight such diseases as prostate and breast cancer, arthritis and bacterial and fungal infections. They may also lower blood pressure and the risk of heart disease.

Pomegranates are in season from September through springtime and are often thought of as a holiday fruit. David Ha said that the small pomegranates found in Tehachapi are the result of a springtime that is too windy for the flowering trees. If the flowers blow off too early, the trees produce smaller fruit.

Jujube, also known as red dates, are available from August to October. Although the fruit grows much like a date it looks like a tiny rust-colored apple and tastes sweet like a woody apple. Jujube has been considered a medicinal fruit for centuries in Tibet, Thailand, Korea and Japan. When dried, the fruit is sweeter and more chewy.

Jujube contains 20 times more calcium than any citrus. It is said to strengthen the immune system, lower blood pressure and help liver disease. It is also used to treat anemia, dry skin, sunburn and may even diminish wrinkles. Jujube can also be used to replace apples and dates in some recipes. 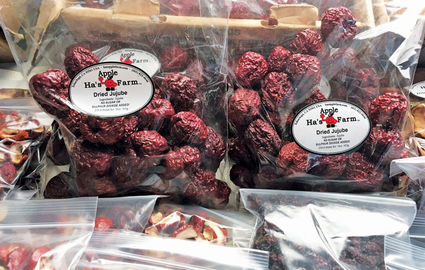 Bitter Melon originated in India and was introduced into China in the 14th century. It is widely used in many Asian countries. It looks a bit like a wrinkled cucumber but more colorful. It can be sliced and dried for use in juices or boiled into tea. The dried slices can also be eaten. Either fresh or dried, it is used as a flavoring in many dishes throughout Asia.

Bitter Melon is said to be used by diabetics to control blood sugar due to its affect on the pancreas. It can also be used to control high cholesterol and to treat obesity.