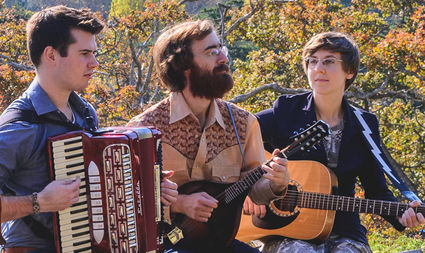 Obviously, West My Friend defies being pigeon-holed into any one genre. Their blend of acoustic instruments accompanying lush three-part harmonies challenges the conventions of today's popular music, as can be seen for the second time in concert at Fiddlers Crossing on Sunday, Nov. 18 at 3 p.m. Their catchy songs and arrangements of guitar, mandolin and accordion draw from jazz, classical, folk and pop influences.

Since 2010, when the band was originally formed, West My Friend has become a key part of a new generation of grassroots folk music on the adventurous acoustic music scene of Canada's west coast.

Classical training and a wealth of diverse musical experience gives them their distinct voice, with passages of intricacy and counterpoint balanced with moments of sweet and exquisite simplicity. Innovation and humor mix easily and seamlessly with traditional genres, echoing old world Klezmer, Cape Breton dance tunes, anthems that sound like show tunes, emotional folk songs and bluegrass vocal harmonies – with a bit of roots-twang thrown in for good measure. Think Mumford and Sons with a female lead singer.

Their name, West My Friend, is a play on "Go West, Young Man." These three musicians are all westerners through-and-through, and have toured throughout Canada, as well as the US and Europe. Their favorite mode of travel and touring, weather permitting? Cycling – with bass and other instruments in tow!

For video and audio samples, go to http://www.westmyfriend.com and http://www.fiddlerscrossing.com.

Fiddlers Crossing is at 206 East F Street at Robinson Street, in Downtown Tehachapi. Tickets may be purchased at Mountain Music, Tehachapi Treasure Trove, Tehachapi Furniture in Old Town, Lucky's Barbershop, online through http://www.fiddlerscrossing.com. or call (661) 823-9994 for reservations. Tickets to the concert are $20, and as always, coffee and goodies are included. The concert begins at 3 p.m. Doors open at 2:30 p.m.

On the horizon: "A Christmas Carol, read by Alex Zonn, Winterdance, Alasdair Fraser and Natalie Haas.