Tesla film crew visits, 'the friendliest town in the state' 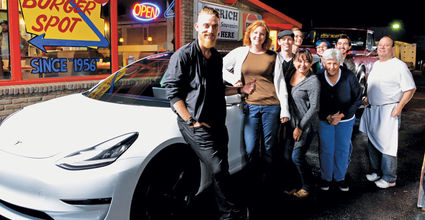 There's no denying, the Tesla is a pretty cool car. Its sleek design and use of clean energy makes it quite desirable. But what can make Tesla even cooler? Tehachapi Community Theatre and a lil' small town charm, of course.

On Oct. 13, TCT actors volunteered to help create a spec ad with Director Daniel Kepler at our local Burger Spot in Downtown Tehachapi. Kepler is a VFX Editor and has worked on a number of Marvel movies including, "Black Panther," "Guardians of the Galaxy" and "Avengers: Age of Ultron." TCT actor and director Nick Altieri said Kepler and the rest of the commercial crew were blown away by Tehachapi.

"The coolest thing about it was, they really liked our town," he said. "They said this is the most fun town they've ever worked in. They liked that the people were so friendly, not just the actors, but the people in this town ... they said it is the friendliest place they've ever been."

Altieri said he hopes Tehachapi can continue to provide small town charm and, "live up to [the crew's experience] and become the friendliest town in the state."

The basic theme of the spec ad was the comparison to old and new. The story follows an old Chevy truck and its Knight in Energy Efficient Armor (the Tesla), who saves the truck after it runs out of fuel. After a quick tow to Burger Spot for a fill up, the drivers' grab an old-fashioned diner meal.

Darren Gockel, 14, was one of the actors on set for the commercial. He said it felt like an 80s movie, complete with arcade games, cool cars and a classic burger joint. 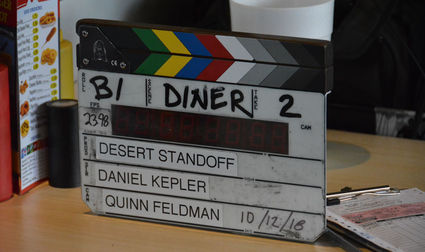 The clapperboard takes a break on set of the Tesla spec ad shoot at Burger Spot.

"It was a lot of fun," he said. "The crew and director were so down to earth. You could tell they were having a lot of fun, too."

According to Altieri, Tehachapi was the perfect backdrop for the commercial's theme, with its classic hometown charm, friendly folks and a picturesque train depot just down the street.

"I love the fact that they came from LA and I'm sure have filmed everywhere, but they picked our friendly town," he said.

Gockel said he appreciated how enjoyable they made the entire experience, from buying the actors milkshakes and food to allowing them to let loose and just have fun.

"This ad felt like a great symbol of people coming together to appreciate technology and just enjoy their lives," Gockel said.