Apple possibilities are endless at Ha's 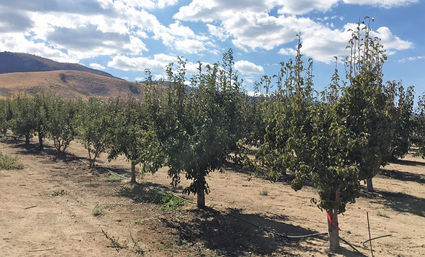 Apple trees at one of Ha's orchards.

We all know that it's apple season in Tehachapi. Most Tehachapi growers open in September and close near the end of October. However, Ha's Apple Farm will be open longer. David Ha said that the Fuji apple which makes up a large portion of his crop is available almost year-round. He currently hopes to be open until the end of November. In Japan, the Fuji apple is often crossed with other varieties to keep it in stores longer, says Ha. It is also somewhat resistant to mildew.

The Fuji is a sweet apple and is very popular on the west coast. Ha said that more tart apples like Macintosh and Red Delicious do better on the east coast as they can take freezing weather better. Although he grows several apple varieties in his orchards, the Fuji is the apple from which he makes most of his apple products.

At this time of year Ha has begun making his apple cider and vinegar. He said that his cider comes from a variety of apples and is pressed on his Steuber Road farm. The cider is frozen so as to be available year-round. Some of the cider is left to age for about two years to become his famous cider vinegar. He said that the process is not unlike making wine.

Some of Ha's apples are sliced and dried, a product for which Ha's Farms has become very famous and is in demand at Farmer's Markets throughout Southern California. Other apple products available at the farm are Apple Butter that is made without added sugar and several jelly varieties.

David Ha has been growing apples in Tehachapi for over 30 years in his orchards throughout Tehachapi and in Cummings Valley. He also grows peaches, pears, plums and grapes as well as apples. The Ha name has actually been better known throughout Los Angeles and Ventura counties than right here in Tehachapi. He is now hoping to change that. Ha's Apple Farm is open seven days a week at 20916 Steuber Rd. Monday through Friday from 10 a.m. to 3:30 p.m. and Saturday and Sunday from 10 a.m. to 5 p.m.