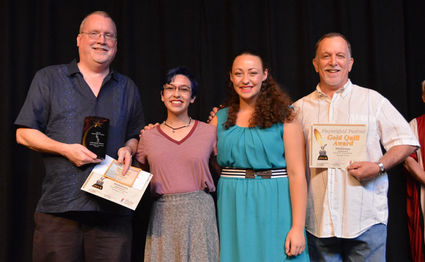 In September, Tehachapi Community Theatre (TCT) held its popular 10-minute Playwrights' Festival at the beautiful BeeKay Theatre. Playwrights from Kern County, Los Angeles County and the Alliance of Los Angeles Playwrights were asked to submit plays based on the theme "Past, Present, Future." The top eight plays that were chosen to be produced were directed and acted by TCT members. At the end of each performance, the audience voted for their three favorite plays.

Winning the Gold Quill, first place, was "Wednesday," a play written by Scott Mullen, directed by Douglas Jockinsen, with Rihana Medina and Sierra Christian performing the parts of two women contemplating time travel. Second place, the Silver Quill, went to "The Lady from Out of the Past," written by Maria Viera, directed by Vicki Souza, with Michelle Cohen and Rick Gould portraying a femme fatal and a down-on-his-luck detective. And finally, the Bronze Quill, third place, went to "The Commandments," written by Tom Walla, directed by Greg Hahn, with the talents of Donald Gardner and Eric Leiss playing the parts of Moses and Aaron.

Coming up next at the BeeKay Theatre is "Sherlock Holmes and the Case of the Christmas Carol," directed by Douglas Jockinsen, opening Nov. 23. For all dates, times and ticket information, please visit http://www.tctonstage.com.