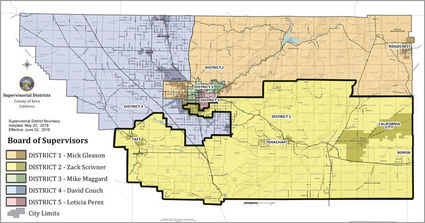 Michael Biglay ~ In canvassing the District, Michael Biglay said he found that the number one issue that people are concerned about is crime. "Everybody wants more deputies," he said. He wants to see more growth, more jobs and an emphasis on public safety. Different communities have different concerns, he said -- in Boron, it's theft and trash dumping; in Taft, the issue is roads. Biglay would begin Town Hall meetings and workshops to identify what is needed most. "I don't feel we get represented in unincorporated areas," he said. Biglay is a heavy equipment operator for California State Parks, working on roads, off-road tracks and assisting firefighters.

Dalmas (Dal) Bunn ~ “I see people crying to be heard,” Dal Bunn said. “There’s a lack of follow-through.” In East Kern, he said, encroachment by big industry “is pushing out the little people.” A 50-year Kern County native, Bunn’s campaign slogan is “Not a pro, just an ordinary Joe working for all the Joes.” With a background in construction, big budgets, hiring and firing, “I am the only one of the four (candidates) who ever made payroll on a large scale. I know the reality of keeping people employed.” He lists public safety, land use issues and mental illness services as crucial concerns. He is manager of the 40,000-acre Loop Ranch.

Zack Scrivner, incumbent ~ Scrivner was first elected to the Board of Supervisors in 2010 following six years on the Bakersfield City Council. He has served several times as chairman of the Supervisors and during his tenure, the board has made tough budget decisions in the wake of falling oil prices and rising employee benefit costs. Scrivner created a program to provide extra funds to unincorporated communities in East Kern and completed labor negotiations with 12 employee associations. He joined the other Supervisors in establishing regulations regarding medical marijuana dispensaries. Like two of the other three candidates, he is a Tehachapi area resident.

Whitney Weddell - Whitney Weddell, a teacher of government, economics and the ideals and ethics of government at Lamont High School, was challenged by her own students to run for Supervisor. “My students said, ‘Why don’t you run?’” she said. “I batted the idea around. After the women’s march, I began to take the idea seriously.” She decided to run, with economy as the main issue. “We have to be willing to diversify economically,” she said. Citing the needs of senior citizens and veterans, “We should have commercial marijuana growing.” Such an industry, she said, can be regulated “without becoming a menace to the community”

Who will sit on the City Council after Nov. 6?