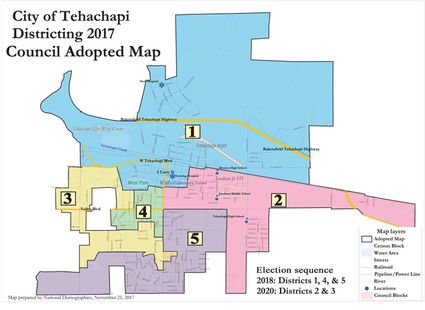 Who will sit on the City Council after Nov. 6?

Malibu attorney Kevin Shenkman accomplished what he set out to do when he sent a letter to the Tehachapi City Council demanding that it slice up the city into electoral districts to balance a supposed racial and ethnic inequality in voting. The City Council, fearing a multi-million-dollar lawsuit if they refused, said OK, we'll do it. They decided to jettison the at-large election system and hired a consultant to divide the city into voting blocs. The average number of registered voters in each of the five districts is 700.

The new system does not appear to have remedied any supposed minority voter imbalance, as it would be hard to identify minority enclaves in Tehachapi, but the system has encouraged people to become involved.

The city of Tehachapi is still phasing in the district system. Two candidates are running at-large in a contest to complete the four-year term of the late Ed Grimes. Three other candidates are running for the first time in their new districts (5,1,4), where they must live. One other district (2) has no candidate running, as City Council member Ken Hetge is completing his at-large term. The council is currently one member down, as no one has been appointed to fill Grimes' place – therefore all but one sitting council person (Ken Hetge, finishing his four-year term) could theoretically be new.

NOTE – The names of the candidates can be a bit confusing. There's a Clint Davies and a Michael Davies and Clint Beacom.

Michael Davies is a transportation manager who supervises the delivery of 40 million gallons of petroleum, with trucks on the road every day. He moved to Tehachapi in 1989 with his family. He is a founder of the Tehachapi Mountain Roller Hockey Association and spearheaded development of the hockey rink on Tehachapi Boulevard. His two daughters played hockey, along with Phil Smith's three boys. Davies is a Kern County Sheriff's Citizen's Service Unit volunteer and has been promoted to sergeant. Davies contributes his time to the Greater Tehachapi Chamber of Commerce and is on the parade committee and the Mountain Festival committee. He helped paint the rodeo grounds and helped fix UP Brite Lake and Mountain Park. Davies has been a game official with the Tehachapi Valley Recreation and Park District for 29 years. "I like to serve," he said.

Pete Graff, a resident of Tehachapi since 1979, is a former Tehachapi Police officer who is coming to terms with the city on a legal matter. "As a long-time resident of Tehachapi and a product of Tehachapi High School, I am deeply invested in the success of this town. I care about our residents and have served them for over 19 years, both as a law enforcement officer and in the private sector," he said. A father of eight, he said the significant issues for the City Council depend on the neighborhood. In a tract on the east side, he said, potential play areas for children are covered with Star Thistle and weeds. Graff would like to create a senior mentor program to help with transportation. The police presence, he said, is good, given that the police force is minimal. He suggests that the city clear off Morris Park (near the high school) and let Little League build its own fields. An option to the $43 TVRPD bond, he said, would be a $15 million measure. He promises to respond to citizens' concerns.

Incumbent Susan Wiggins is a native of Mojave and local historian who has served on the City Council for eight years, including one term as mayor and recently as mayor pro-tem. "We have a good town with a good heart," she said. She has worked as a journalist since 1968 and with the Mojave Unified School District in drug and alcohol prevention. During her tenure on the City Council, Home Depot, Tractor Supply, Fairfield Inn, Best Western, downtown revitalization and Walmart came to town, generating new revenue. Smart growth and master planning, she said, is the essence of a small town. She supported the coming of Walmart, as so many senior citizens who are not mobile pleaded for it. She said that Tehachapi has a balanced budget while "many of our neighbors are in big trouble." The Safe Routes to School improvements, she said, make a huge difference in safety at Tompkins Elementary. Of the veterans on the City Council, she said, "We have a wealth of experience and knowledge we have shared with the city."

Clint Beacom is a law enforcement officer who was raised by the beach in Port Hueneme until his family moved to Stallion Springs when he was 12. He was a firefighter in the Air Force. Beacom is an assistant AYSO soccer coach. His work takes him to Los Angeles, where he sees how devastating drug addition and homelessness can be to a city. "I consider this town to be a refuge," he said. "I support and work with public safety to make sure it is preserved. He has two children in elementary school and one younger. "I am a homeowner and taxpayer. I want to ensure that government operates efficiently. I keep a close eye on proposals to increase taxes – an increase is a good indicator of which direction we are going." Beacom would like to see more cooperation among City Council members. His entire career, he said, has been dedicated to mediating disagreements.

Incumbent Phil Smith lived in Keene as a child, where his father was a railroad signalman. He moved to Tehachapi in 1960, when Tehachapi Boulevard was still G Street. He served in the U.S. Coast Guard, where his job was in telecommunications and electronic systems. Like Michael Davies, he helped establish the hockey rink and coached and refereed when all five of his children were in AYSO at the same time. He was first elected to the Tehachapi City Council in 1986, serving several terms as mayor. As a ranking member of the Kern Council of Governments, he has brought funds to the city for transportation projects, one of which was the construction of Challenger Drive from Mill Street to Dennison. "The cars used to drive under the drainage ditch before that," he said. "Now the hospital has two access points." Smith can tick off a number of projects that have come to fruition during his time on the council, including the revitalization of the BeeKay Theatre and the Depot. Partnerships between the city and rec and park district, the water district, the CSDs and real estate agencies, he said, "are golden."

Clete Heckathorn was born and raised in Tehachapi and is a third generation Tehachapi High School graduate. He is a U.S. Air Force veteran, employed at Rio Tinto U.S. Borax as an NCCCO Nationally Certified crane operator and the Refinery Maintenance Supervisor. Heckathorn is on the Little League Board of Directors. He supports veterans through Nine Line (the medivac request for a soldier injured on the battlefield), an organization that supports veterans. "I lost two friends from suicide," he said. "There is so much that can be done to help those who are suffering from PTSD." He is interested in preserving historical sites in Tehachapi. "This is a town I love and cherish," he said. "I may be a face with new ideas," he said, "but I appreciate why my parents and grandparents loved Tehachapi." Disturbed by the behavior of some of the City Council members, Heckathorn promises accountability and transparency.

[Heckathorn has requested we run his statement verbatim: "The biggest issue I've found while campaigning is my constituents feel as if there is corruption within our city. They have said that they feel that some of the city council members are rude, disrespectful, and biased. They want accountability and transparency. If I am elected to city council, I will be 100% transparent like I was when I was the president of Tehachapi Little League. I will give all of my constituents my undivided attention and hear them out, even if it's something I don't like hearing. I will convey that I work for the people, and not the other way around. The next biggest issue I've found is that residents do not want Measure R. I think I've encountered maybe 3 people that have said they are in favor of the bond and the rest are completely against it. The way I would deal with this is I would push to have the entire TVRPD board become an elected board by the voters."]

Bobby Fritz has stepped down and is no longer a candidate for City Council.

A dog attacked his six-month-old daughter Adaliah on Sept. 11, requiring emergency brain surgery. The crushing jaws of the dog thrust bone fragments 3.7 cm into the child’s brain. She is home and “acting like nothing happened,” Fritz said, but the follow up requires regular doctor appointments and travel to Valley Children’s Hospital in Madera once a month for MRIs.

Incumbent Dennis Wahlstrom has sat through hundreds of City Council meetings during his former employment as director of the Public Works department for 25 years. "For the last 20 years I went to two meetings a month," he said. During his employment with the city, he reorganized the water, sewer, public works, airport, transit system and rodeo grounds. When he started, he said, the newest piece of equipment was 15 years old. Wahlstrom is a quiet person who prefers to listen before speaking. "You don't learn much while you're talking," he said. A four-year member of the City Council, he said that the district system is "something we have to grow into." He said the demographer who drew the maps wasn't quite clear as to where the boundary lines were, as in which side of the streets. Wahlstrom is a stickler for following the proper governmental processes.

Joan Pogon-Cord can hardly walk down the street without running into a former student. A Tehachapi resident for 47 years, Pogon-Cord was a physical education teacher and coach at Tehachapi High School for 40 years. "Once a Warrior, Always a Warrior," she said. She has taught generations of students "cooperation, commitment and consideration." She is in favor of cleaning up yards and vacant lots, affordable housing for seniors with affordable health care. She wants to improve parks and recreation "for all the people, not just children." She has coached everything, she said, except football, baseball and cross-country, and spent much time traveling with students on their road trips. Pogon-Cord was president of the AAUW, CIF, Tehachapi Boosters, the Tehachapi Association of Teachers and was the Depot event coordinator. "I prefer talking to people," she said. "Facebook is not my friend."

Clint Davies MOVED TO Tehachapi three years ago. He comes from a family of realtors and says that realtors "embody the American dream." Real estate, he said, "allows people to get to the middle class." Davies is an advocate of Measure R, saying "We need a place for our kids to go. If not, they will go to a strip mall or a Walmart or the streets. We have to build this. Property values are gong to go up [as a consequence]." Davies supports the idea of building a greenhouse next to the high school, so the students can grow plants such as Rosemary and sell the product. Davies i s a landscaper.

Return to Part 1 of the article: https://www.theloopnewspaper.com/story/2018/10/13/local-news/kern-supervisors-battle-for-big-2nd-district/4801.html