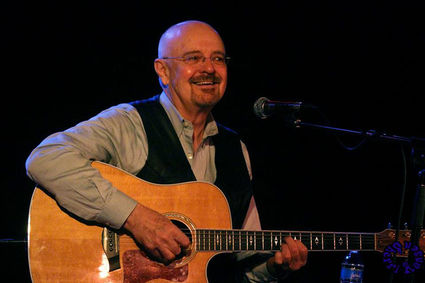 "It is simple, really. With James Lee you get great songs, great guitar playing, great voice and a gifted comedian as well. You are in for a very entertaining evening." – Village Voice

Fiddlers Crossing is bringing James Lee Stanley back to the stage of the BeeKay Theatre on Saturday, Oct. 27 at 7 p.m. Over the last decade, he has given concerts at Fiddlers Crossing, Mama Hillybean's and the BeeKay Theatre. James has become a favorite in Tehachapi because of his remarkable ability as a vocalist, songwriter, composer and guitarist, matched with his hilarious repartee. The audience will be treated to an evening of tenderness, humor and storytelling. He has been hailed as one of the all-time greats on the singer-songwriter circuit, and is certainly an extraordinary entertainer.

Once a frequent visitor, James is now a Tehachapi local, having relocated from Los Angeles within the last year. He now makes his home in Bear Valley Springs and from all reports, loves it!

Stanley hails from Philadelphia, Pa, and has been performing since he was 14 years old. Along the way, he was in the USAF as a Chinese linguist, and was an actor in some Star Trek: Next Generation episodes. He gives up to 300 concerts per year, and has opened for or played with a diverse roster of performers, ranging from Bonnie Raitt to Robin Williams.

A true Renaissance man, Stanley writes a blog called, "Datamusicata: Tips, hints, clues and info for the artist in us all." The blog can be found at http://www.datamusicata.com. And if musician, actor, writer, linguist, humorist, isn't enough, James Lee Stanley is also a fine artist.

For more about Stanley, go to http://www.jamesleestanley.com.

The concert starts at 7 p.m., with doors opening at 6:30 p.m. Tickets are $20, available at Tehachapi Treasure Trove, Tehachapi Furniture, Lucky's Barbershop, or at the Fiddler's Crossing Wednesday Open Mics and First Fridays. Tickets are also available online at http://www.fiddlerscrossing.com and may be reserved by calling (661) 823-9994. The BeeKay Theatre is located at 110 S. Green Street, downtown Tehachapi. Buying tickets early is strongly suggested.

On the horizon at Fiddlers Crossing: West My Friend, "A Christmas Carol", read by Alex Zonn and "Winterdance".