The story of Mildred and Bud Cummings 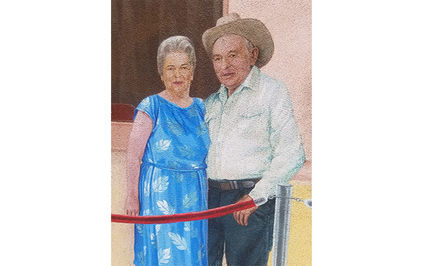 Mildred and Bud Cummings in the Beekay Theatre Mural.

Standing fourth in line in the BeeKay Theatre Mural one will see two more "old timers," Mildred and Bud Cummings. It would take volumes to include the history of the Cummings family, but I will include information that will certainly put Bud and Mildred in the annals as one of Tehachapi's earliest settlers.

In 1849 a young teenage Austrian boy, named George, stowed away on a ship headed for California. This would have involved the ship traveling the North Atlantic Ocean, the South Atlantic Ocean and around Cape Horn where the Pacific and Atlantic Oceans meet at the most southern end of South America. The Panama Canal, which could have cut their journey in half was not yet constructed. The long trip "around the horn" gave George a chance to become acquainted with the ship's Captain whose name was Cummings. By the end of the journey he decided to assume the name Cummings, from that day on.

His first venture into business was to try his hand at gold mining. He had hit California at the height of the Gold Rush; the California gold strike in 1849. The gold mining was unsuccessful and he set his sights on cattle and real estate.

It was to this beginning that George became a successful business man, both in real estate holdings in Los Angeles and in cattle which would be herded through the Tehachapi area to the north. He was soon to purchase some land – which would one day turn into 7,000-acres of land for cattle and farming and one day to be known as Cummings Valley.

He was to wed Sacramenta Lopez, the daughter of Don Francisco Lopez, a man of wealth. The couple would live in the land that was already being labeled Cummings Valley. Their eldest son, Edward, would be born there. Edward was Bud Cummings father.

Sacramenta, however, was not attuned to farm life and the family moved again to the city where George had business dealings in real estate, as well as an elegant home. One city block in Boyle Heights was called "Cummings Block." All of this while still acquiring land in his Cummings Valley.

The couple would have five boys and one girl; all living in Los Angeles. George had to travel to see to his holdings in the Tehachapi area and farther north. He was to die an untimely death in a Bakersfield hotel fire in 1903.

It was during this time that Edward, the eldest son, moved to Cummings Valley permanently. His younger brother, Clarence, was to join him and the responsibility of the large acreage of grain, alfalfa, fruit orchards as well as the herds of cattle, would find them well-known as farmers and cattlemen. Clarence had no children so both men, Ed and Clarence , saw to it that Ed's son, E.J. "Bud" Cummings, born in 1905, received proper training in the up keep and running of the large holdings.

Bud and his sister Carrie grew up in the old Cummings ranch house, which nestled in the shadow of Cummings Mountain. Their elementary school education was gained in a one room building right there in the valley. Even at that time the school was known as Cummings Valley School.

The one-room school house included education only through the eighth grade. This meant that all students in the Cummings and Tehachapi Valleys must board in dormitory style rooms in Bakersfield, Lancaster or Los Angeles to complete a high school education. Bud was to attend Kern County Union High School in Bakersfield. In later years it would be known as Bakersfield High School. In the mid-1920s he was a star athlete and was offered a football scholarship to Santa Clara University where he was Captain of the Freshman and Varsity teams for three years. After working for two years he enrolled in Santa Barbara College to obtain a teaching credential in Physical Education to become a coach.

Mildred Ellen Kimberley moved to Tehachapi with her family in 1917 when she was six years old. Her father was to be employed as Chief Mechanic at the City of Los Angeles Cement Company; later to be Monolith Portland Cement Company. She and Bud were six years apart in age so they were not school chums. She also graduated from the same high school in Bakersfield but six years apart. As fate would dictate, she married Edward J. "Bud" Cummings on January 3, 1931 to make her own place as an important member of a local pioneer family.

Early in their marriage, she and Bud would spend 13 years in Pacific Palisades and Santa Barbara while Bud followed a coaching career, as well as being an administrator for the National Youth Administration. But in 1944 they brought their three boys, John, Steve and Kim back to Cummings Valley for Bud to take over the operation of the 7,000-acre ranch for his Father, Ed and Uncle Clarence.

Mildred, a hard working partner was active for years in the ranch's operation. Besides preparing delicious meals for the ranch hands she was not above going out on the range to assist in vaccinating cattle.

Mildred was known to be a kind and generous woman. She was one of the guiding lights in the establishment of the famous Hospital Guild Thrift Shop that provides much financial help in assisting in purchasing equipment for the local hospital.

At Mildred's funeral the Hospital Guild members were in attendance in their blue work smocks. Some may recall that during her funeral all of the lights in the church and in most of the town went out. A piece of equipment had cut the main line. People attending the service thought it fitting to think that it was a good way to say, " a dear light had gone out in Tehachapi." Local citizens will always have memories of Bud and Mildred Cummings.

They are both gone now but a few of us can remember Bud as he once acted as "emcee" for the Old Timer's Picnic in the park. Recognizing out of towners here for the day and keeping his humor light and the mood the same. The BeeKay Mural continues to show them as they once appeared: Friends of the community.